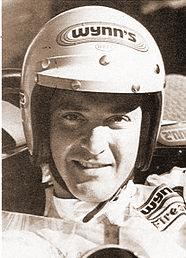 Perhaps the greatest quote by Bill Vukovich Sr. was "There is no secret. You just press the accelerator to the floor and steer left." To many of his multitude of fans around the world in the 1950s, it was an understatement; however, it seemed logical to his nine year-old son, Billy, Jr. As he was growing up, young Billy looked at his dad as a person whose job it was to drive a race car. He would go off and race cars and win money and then come home just like other people who had jobs. That was his job," Billy told an interviewer years later.

In 1955, when he was eleven years old, Billy lI would have to learn the more serious side of racing when he lost his father in a terrible accident at the Indianapolis 50. Billy II would grow to look at the tragedy at Indy as something that was. Part of racing, part of life, but life must go on and I learned to accept that." Ten years later, Billy Il began a successful career of his own that led to USAC and CART Championship Car series races, and twelve Indianapolis 500 starts. In his eighteen-year career, he had a combined 158 starts and finished in the top ten eighty-five times. In 1973, Billy II won the Michigan 500. He captured twenty-three national midget victories in his career, driving in part for J.C. Agajanian, the famous promoter and race car owner. Billy Jr. was inducted into the National Midget Auto Racing Hall of Fame in 1998, joining his father. It's also interesting to note that the logo of the NMAR features depictions of both Vukovichs, senior and junior, and the midget cars that they raced.

At Indianapolis in his first start in the legendary annual race, Billy worked his way through the pack, starting in the 23rd position to finish seventh which earned him the Indy 500 Rookie of the Year Award in 1968. He would go on to compete at Indy twelve times from 1968 to 1977, 1979, and 1980. Billy II finished in the top eight at the Indy 500 six times. He finished second to Gordon Johncock in the rain-shortened 500 in 1973, third in 1974, fifth in 1971, sixth in 1975, and eighth in 1979. "He represented the family well," said Indy veteran racer, Roger McClusky, "Billy, Jr. was damn good. He raced them all-midgets, sprint cars, on dirt tracks, pavement, and he obviously was great on the speedways. He was a real pro. The Vukovich family's contributions to auto racing came at a high price for Bill, Jr. Losing his father in the 1955 Indy 500 was surely a tragedy, but then in 1990, he and his wife, Joyce, lost their son Billy, III, the 1988 Indianapolis 500 Rookie of the Year, as the promising young driver was killed in an accident a a track in Bakersfield while driving a sprint car. Billy III was twenty-seven years old. All three of the racing Vukovichs are enshrined in the Fresno Athletic Hall of Fame and their names are revered among racing fans in their hometown as well as around the world.