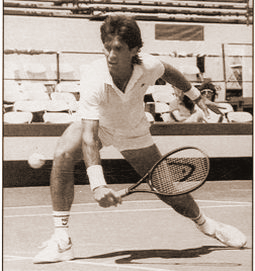 Butch Walts, one of Fresno's greatest tennis players, starred at Bullard High School and the University of Southern California. The Association of Tennis Professionals ranked him as high as #16 in singles in 1978. His decade-long career included victories over tennis greats such as John McEnros, Ilie Nastase and Guillermo Vilas as he amassed four singles and fourteen doubles titles. Walts was immersed in tennis at an early age, growing up living next door to the Modesto Racquet Club, founded by his grandfather, Fred Earle, Jr. There was little doubt that Walts was headed for greatness when he won the United States Tennis Association National Junior Championship at age twelve, defeating Dave Sworbeck, 4-6, 9-7, 6-0. He teamed with his father, Ken, to win the National Father-Son title.

He struggled at times to control his temper when he was young and was once disqualified from a tournament after smashing two rackets. His court demeanor improved after he survived cancer and gained a new perspective on the game. Walts later established foundations to assist cancer patients. Following Bullard High, Walts played two years for USC where he was an All-American. His freshman season was wiped out when he contracted a virus, but he teamed with Bruce Manson to win the 1975 National Collegiate Athletic Association Doubles title. That year was huge for Walts, who not only won the NCAA doubles, but also went to Mexico City and took two gold medals in the Pan-American Games. It was one of the most unusual tournaments he ever played in. He defeated Mexico's Adolfo Gonzales 6-3, 3-6, 7-6 in the singles finals while the hometown crowd jeered, blared noise makers and threw objects onto the court. Walts and Manson then defeated Gonzales and Raul Contreras in the doubles final, 6-3, 6-4. "I didn't allow the yelling to distract me; in fact, I just cheered with them, but I was glad we got out of there in one piece," Walts said. "We learned later that the government told the people to harass us."

Walts completed that big year by winning the Palm Springs Collegiate Tennis Classic. He then turned pro, foregoing his last two years at USC. He defeated veteran Cliff Richey, 3-6, 6-4, 6-4 in an open tournament for his first paycheck of $20,000. Throughout his career, a booming serve was Walts major weapon. McEnroe said after losing to Walts: "There was no defense against that serve." Walts won the Trans-America Open in 1977 in San Francisco to beat top-seeded Brian Gottfried for the $25,000 first prize. That was the same year he signed with the Phoenix Racquets in the fledgling Team Tennis League. One of his teammates was superstar Chris Evert. He defeated an older, but still powerful Australian ace Rod Laver 7-6 in a match against San Diego. He also beat Nastase 7-6. In 1978, he won probably the most prestigious single match of his career by upsetting Vilas, the defending U.S. Open champion, 6-4, 7-6, 4-6, 6-7, 6-2 in a classic four-hour and eleven minute thriller to reach the quarter finals of the Open. He had little strength left and bowed in the quarters to McEnroe in straight sets.

Walts' professional career was interrupted in 1981 when he was diagnosed at age twenty-seven with cancer. He lost thirty pounds from his 6'4" frame, but successfully fought the cancer with three surgeries and six months of chemotherapy. The side effects of the chemotherapy were minimal and Walts said at the time he never lost hope and never doubted he would play tennis again. Walts was voted the Comeback Player of the Year by the ATP in 1983 and in 1984 was voted the Team Tennis MVP after leading the San Diego Buds to the championship. He was also honored for his fight against cancer by Ted Kennedy Jr. He retired from tennis for four weeks in 1985, but returned to Fresno to win the Arc Fresno tournament in 1985 at the Sierra Sport and Racquet Club.