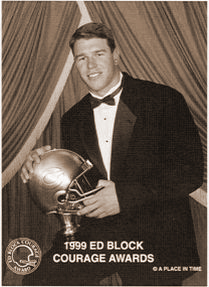 It was always the same refrain and Ryan Wetnight used it as an incentive to prove his detractors wrong. And prove it he did, by playing tight end at Fresno City College, Stanford University, and then for the Chicago Bears. "The knock on me was that I was too small to play tight end. I was 200 pounds at Fresno City College and about 205 pounds when I went to Stanford," Wetnight said. "Funny, though, as I started two years at each place, although in my senior year at Stanford I finally bulked up to about 230 pounds." Wetnight's father, Dick, moved the family from Arizona to Fresno when Ryan was a year old. Ryan got his first taste of football as a five-year-old spectator at San Joaquin Memorial and Bullard High games. In junior high, Wetnight played soccer, baseball, and basketball. He arrived at Hoover 5'2" and 130 pounds, but he turned out for football because his friends did. "I played guard because I didn't realize I wasn't big enough to play guard," Ryan chuckled. "So I just played it. I had never played organized football, so I didn't know what I was doing. I didn't know an offensive lineman from a skilled position."

Ryan spent his early years watching Fresno State football and basketball games with his father who was heavily involved in the Bulldog Foundation. "I remember going to the California Bowls watching Kevin Sweeney and great receivers like Henry Ellard, Stephone Paige and Stephen Baker," Ryan recalled. "Tll never forget the NIT champion basketball team. I knew Coach Boyd Grant and all the players. Everything revolved around Fresno State athletics and I loved it." He doubled as a backup tight end on offense and safety on defense as a sophomore, but was the starting tight end as a junior. He really began to learn the game and, at last, "knew what he was doing."

His senior year, Coach Pat Plummer needed a quarterback and chose Ryan. "So I finished high school as a quarterback," Wetnight said, "I threw my share of interceptions because I wasn't sure where cover two or three were. Pat really helped me. I just tried to find my guys and get them the ball." He did well enough that Hoover upset Clovis West and had one loss heading into the playoffs where the Patriots were hammered by Bakersfield.

Wetnight was a key player when Hoover was Valley Champion in basketball during his junior year. The Patriots reached the state playoffs, beating Mater Dei, but falling to Crenshaw in a close one. With no Division I offers, Wetnight enrolled at Fresno City College under Coach John Volek whose son Bill, a future star at Fresno State and in the NFL, was the quarterback. Wetnight asked Coach Volek where he could play and was told they needed a tight end. He started and excelled for two years, becoming a scholastic All-American. Volek convinced Stanford coaches to take a look. Wetnight had a big game in the Producers Bowl for the Rams. Stanford offered a scholarship, but he had to write an essay to the admissions board before he could enroll.

"At Fresno City, we had good coaching and great teams," Wetnight said, "I really got to understand the game and the speed of play. I felt I had an edge in experience over the freshmen and sophomores at Stanford. So I was able to slide in and start as a junior." Coach Dennis Greene had a good season with a young team. The Cardinals lost to Georgia Tech in the Aloha Bowl, but the future looked bright with nearly all starters returning. Then Greene took the Minnesota NFL head coaching job. Wetnight said the despair of losing a good coach was brief when Stanford hired Bill Walsh. "Greene had taught us everything he learned as an assistant to Walsh, so now we were getting it straight from the horse's mouth and everyone was excited again. We finished 10-3 and beat Penn State in the Florida Blockbuster Bowl. We beat Cal who was in the top ten and Notre Dame with Lou Holtz when the Irish were number six." A bonus for Wetnight and teammates was their opportunity to train with Jerry Rice and several 49er players who worked out at nearby Menlo College. Joe Montana would come by and throw passes to the Cardinal receivers. Wetnight was told that he was capable of playing in the NFL enough times to believe it. Ron Green was Wetnight's position coach at Stanford. but when Ryan graduated Green was the offensive coordinator for the Chicago Bears. "Ron called me and said they [the Bears] were going to sign me as an undrafted free agent, which basically meant I could try out for the team in the mini-camp. He said 'I think you can play, but you will have to convince everyone here that you can." That was the challenge Wetnight needed. He started the opening game against the New York Giants at Soldier Field and said he was one nervous guy staring across at linebacker Lawrence Taylor. Wetnight related, "I worked through it and played seven seasons for Chicago. In my third season, with about three games left, my cleat caught in Detroit, my knee popped, and I tore my ACL. I ended up playing the rest of the game, but the next day my knee was swollen and I could hardly walk. I lost about four games and had to have surgery."

Most players miss a season due to an ACL operation. Wetnight had worked hard for a starting job, so he wasn't going to lose it. He was in rehab twice a day and up to full speed when training camp opened in July. The knee still hurt, but he played the whole year. When he left Chicago, he moved to Green Bay with Brett Farve. Doctors told him that concussions wetnight had received could be a problem, so he retired. “So I walked away from football at age thirty. It wasn’t easy having played since my days at Hoover.” Wetnight took a year off in Arizona to work with a consulting firm. He turned down an assistant coaching job at Ohio State because he wasn’t ready to subject his wife and child to a profession where four years is average at any one school.