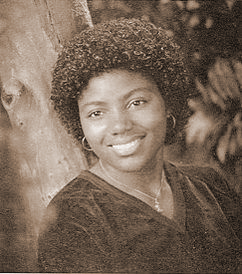 It's quite possible that the Fresno County athlete that most dominated the sport that they participated in, was a female. Jackie White had the numbers and accomplishments in her basketball career to suggest that what she did was of legendary proportions. During her high school years at San Joaquin Memorial from 1977-1980, Jackie was as unique to girl's basketball as Michael Jordan was to professional basketball in the 1990s. Playing under a famous figure in girls' basketball coaching, Mary Brown, Jackie was ahead of her time in that she displayed marvelous skills effortlessly and rewrote the Valley and California state high school record books. In her four years at SJM, Jackie led the Lady Panthers to a 100-4 record while averaging over twenty-four points a game, 7.5 steals, 7.1 rebounds, and 4.3 assists. During that time, the Panthers won four straight Central Section championships.

At 5'8", Jackie helped put the girls' game on the map in California with her amazing ball-handling skills and her Jordanesque athletic ability in that she could score from anywhere on the court. Her quickness was unparalleled: she could drive to the basket at will and hit from long range with deadly accurate shooting skill. On defense, Jackie was also no picnic for opponents as her quickness led to many steals and yet another fast break. Jackie's game brought big crowds to the SJM gym to see the phenom perform and it was the same on the road. She was twice-selected to the Parade magazine High School Al-American Team, the top honor for girls basketball at the time in the USA. Locally, Jackie was all-everything in league, regional, and statewide play whenever she and the Panthers took the court. She was twice-named California Player of the Year, was three-time Northern California Player of the Year, and the first female recipient of the prestigious Bnai B'rith Award which has gone to the single best student athlete in the Fresno area for well over fifty years.

Obviously, there was a long line of college recruiters going out the door of the women's basketball office at San Joaquin Memorial. Jackie chose Louisiana State University and played in Baton Rouge for a year, but came back to California to play for Cal Poly Pomona where she was a two-time First Team All-American and chosen as the NCAA Division II Player of the Year in 1983. In her final year of college eligibility, Jackie competed at Long Beach State, leading the 49ers to a #3 ranking in the nation while she averaged fifteen points a game. After college, Jackie would go on to become the second woman to play for the Harlem Globetrotters. She got to travel and perform with perhaps the most famous mens' team ever known and loved all over the world.

There were many amazing performances that Jackie White gave during her time on the hardwoods. She and her SJM teammates were playing Rio Americano High School of Sacramento in a semi-final game at the Tournament of Champions at the Oakland Coliseum on March 14, 1980.

Jackie was on a roll as she had scored thirty-three points the night before in a 61-41 win over St. Francis of Mountain View. In seven TOC games, Jackie averaged 32.3 points a game scoring 226 points--still a TOC record. Rio Americano came into the game with a 29-1 record and for almost three quarters, the 7,500 fans at the arena were entertained by the Raiders, who had built a seventeen point lead with six minutes to play in the third quarter. What happened next was something that legends are made of. "What I remember most vividly about that game was kneeling at one of the benches and talking to God," Jackie said recently. "I said, "If you are ever going to let me show the ability and talents You gave me, let me do it now.' When I came out after halftime, I felt something almost spiritual." Jackie, five for thirteen shooting in the first half, had eleven points in the scorebook. At the six-minute mark in that third period, Jackie and teammate, Sue Mahackian, started hitting their shots and with eight minutes to go in the game they found themselves trailing the Rangers by just eight points.

Jackie wound up scoring thirty-three points in that second half comeback, twenty-four in the fourth quarter. "That was Jackie," Sue Mahackian says, "She was phenomenal. When she started scoring, she couldn't miss." The packed house at the Coliseum was on its feet screaming her name as Jackie poured in one long range missile after another followed by a steal to set up one more perfect shot for the Panthers.