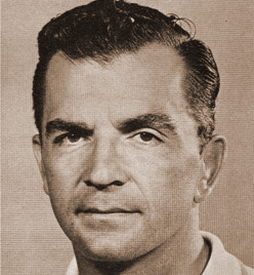 Hans Wiedenhoefer Sr. was part of the original coaching staff when Fresno City College fielded a football team for the first time in 1948. He remained with the college for thirty-six years with six conference titles as head coach and two state titles in wrestling. He also was athletic director for twenty-five years, coached the golf team for twenty-eight years and assisted with the track squad for five years. He was truly a cornerstone of Fresno City College athletics.

Colleagues praised his ability as an administrator. "Sure, he would call you in for progress reports and any suggestions to help, but basically he gave you a job and let you do it," said long-time track and field coach Bob Fries. Bill Musick, the defensive coordinator when Wiedenhoefer was football coach added: "I loved the guy, he was such an interesting person. He could talk on just about any topic and give the history, background, anything you wanted to know. When Dennis DeLiddo was the wrestling coach, he said hardly a day went by that he didn't spend an hour in Hans' office just listening to his stories."Wiedenhoefer, who often lectured on history at City College, had served in World War Ilin the Pacific. He was nearly immortalized as one of the U.S. Marines raising the American flag on the island of Iwa Jima. After the ceremony, Wiedenhoefer had his picture taken with the flag atop the mountain where one of the bloodiest battles of World War II was fought. "The captain lined us up and said you, you, you, you andI was next in line" Wiedenhoefer said. " was also on the Hawaiian island of Oahu preparing for a football game when the Japanese bombed Pearl Harbor." Wiedenhocfer recalled that he and other players from San Jose State University and Willamette College football teams were at their hotel on Waikiki Beach on December 7, 1941 when they learned that their tour of the battleship U.S.S Arizona had been canceled and saw smoke rising from Pearl Harbor and planes flying. They would learn that some of the smoke came from the sinking Arizona. Wiedenhoefer said it was clear that this wasn't any kind of an military maneuver. The two teams had sailed to Hawaii on the U.S.S. Lurline from San Francisco for football games with the University of Hawaii. Instead, players on both teams were issued weapons and steel helmets to help hold off possible invasion.

Upon returning home, Wicdenhoefer and many others joined the Marines. Following his Marine discharge in 1946, Wiedenhoefer earned a master's degree at Stanford University and, in 1948, accepted a teaching/coaching assignment at Fresno City College as the line coach under head coach Stoney Johnson where he worked for his entire career. Wiedenhoefer was born in Karlsruhe, Germany, but was raised in San Francisco, where he excelled as an athlete for Lowell High School, then starred in football and wrestling for San Jose State.

At City College, his eight-year tenure as head football coach produced six conference titles and a list of noted players, including Tom Flores and Vestee Jackson. One of his first junior college All-Americans was Bill Herron. In 1958, his 8-2 team beat Sacramento City College in the annual Sanger Sequoia Bowl and that same year, his wrestling team tied for the state title. In 1959, he turned the football reigns over to Clare Slaughter and was named athletic director by school president Stuart White. He was the AD until he retired in 1984.

Wiedenhoefer was a true pioneer in wrestling. He coached the Rams to two state titles in nine seasons and organized the sport in several other community colleges. He was named wrestling coach of the year in 1959 and 1962 and coached twelve individual state champions. Wiedenhoefer also coached the golf team for twenty-eight years and helped with track for five years. He served on the President's Council for Physical Fitness. Hans was a world traveler and enjoyed studying East Germany's highly successful sports program. Wiedenhoefer died in 2006 at the age of eighty-six.