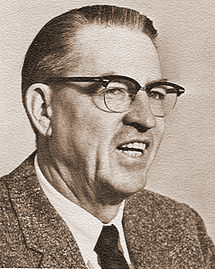 Grizzled veteran and pioneer of the Fresno chapter of Ducks Unlimited, J. Martin Winton was known as "Mr. Duck." He probably knew more history about the days of the so-called "market hunters" and the heydays of the Dos Palos and Los Banos Grasslands Duck Clubs than anyone in the local area. Winton testified before Congress on water bills that enhanced the wetlands and protected waterfowl. His many stories about hunters from San Francisco who would take the train to Los Banos, who would spend the weekend partying and shooting ducks, and drive back home to sell the birds to Chinese restaurants on the waterfront. He worked with Tony Coehlo and the Grasslands Association representative who helped Winton pass bills to protect waterfowl and Winton remarked about Tony, "He's our boy."

Winton established Vista Pharmacy across from Roosevelt High School and instituted the idea of delivering products to the customers. Winston's son, Jim, now runs Vista and his grandson Michael owns Winston's Professional Pharmacy. He built one of his first cabins at Huntington Lake and spent a lot of time with his family in that picturesque setting. Winton was instrumental in pushing the building of the San Joaquin Fish Hatchery in Friant. Winton was at the forefront of fish planting in the high country when the fish were carried to the backcountry lakes by burros. He and several other members of the Fresno County Sportsmen's Club accompanied biologists from the State Department of Fish and Game on these trips. Winton also was far ahead of his time in warning that all the pesticide-tainted water sifted off farm lands would be a disaster for waterfowl.