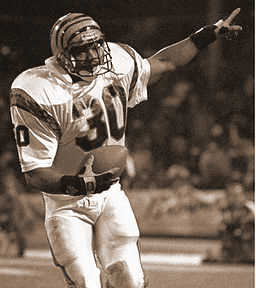 While the 6-foot-2, 231-pound fullback carried the Cincinnati Bengals to the Super Bowl with his fast legs and elusive moves, his personality captivated America during a sensational 1988 rookie season. The Edison High School graduate rushed for 1,066 yards and scored 15 touchdowns on the ground during the regular season to power the Bengals offense. Each time Woods reached the end zone, he and his teammates celebrated with an infectious dance of his creation - the Ickey Shuffle. The dance consisted of Woods bouncing on one foot, then the other spinning his finger in the air and spiking the ball. Before long, he was on magazine covers and in television commercials.

Woods was just as good in the postseason, as he set a playoff franchise rushing record with 126 yards against Seattle and had 102 more on the ground in a victory over Buffalo for the AFC Championship. Woods had a game-leading 79 yards rushing in the Super Bowl, but the Bengals fell to San Francisco. He finished the postseason with three touchdowns.

A knee injury cut short Woods’ career after his second-team All-NFL rookie campaign. He finished his NFL career with these marks: 37 games, 1,525 yards rushing, 27 touchdowns, 4.6 yards per carry. He also had 47 receptions for 397 yards.

Prior to being a second-round draft pick, Woods won the 1987 NCAA Division 1 rushing title at the University of Nevada, Las Vegas with 1,658 yards. He rushed for more than 200 yards in a game three times that year.

Woods starred in football and track and field at Edison. With the Tigers’ 400-meter relay team that set a state meet record with a time of 40.83 seconds.