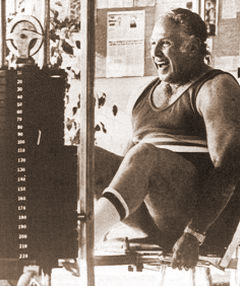 The elite list of men who became rich and famous because of their association with the subculture of bodybuilding or "pumping iron" is legendary - Jack Lalanne, Joe Gold, Vie Tanny, Armold Schwarzenegger - but this list could not be complete if it didn't include Fresno's own Harold Zinkin.

Zinkin, standing only 5'7", was an acrobat and bodybuilder. Born in San Francisco and reared in Southern California, he was the first "Mr. Califormia" contest winner in 1941. Lalanne from Oakland literally evolved into a "Jack of All Trades" as he and Harold performed eye-popping feats of physical strength and endurance, much to the enjoyment of the crowds. Zinkin would work out at Tanny's Gym and "Muscle Beach" when he was nineteen, and to his complete surprise, he found himself entered by Tanny in the first "Mr. California" bodybuilding and posing contest in 1941. Zinkin at first balked at posturing on stage to show off his physique, but then relented, picking up how-to-pose tips from some of the muscle magazines that were popular at the beach and in the gyms at that time and Harold won. He also was the runner up in the 1945 "Mr. America" contest. Unbelievably strong for his small stature, Zinkin earned many titles in subsequent weight-lifting competitions. But the world of bulking up, looking cut, shredded, buffed and glistening oiled iron pumpers would hear a lot more about the lifetime achievements of the Santa Monica pier-side acrobat, body builder, and national weight lifting champion.

Zinkin instinctively knew the blueprint for successful bodybuilding: developing musculature by the use of a series of progressive resistance exercises. It was a regimen that had evolved from kids who lifted cans and jars filled with sand, bricks, and even car axles in sweaty workouts to their eventual use of machine-crafted dumbbells and barbells. Harold moved to Fresno in 1953 and, by the mid-sixties, had invented the Universal Gym Machine which would make him a multi-millionaire. The revolutionary Universal Gym Machine soon became the standard multi-station gym apparatus throughout the nation; it was so widely accepted that even hard-sell college coaches, who were set in their workout regimes, endorsed its individually beneficial usage. As many as eight people could use the machine simultaneously during workouts that exercised various parts of their anatomies. Zinkin's creation was simple to use and contain several stations that featured easy-to-move, adjustable weight plates.

Zinkin's invention was so successful that he was able to market it worldwide. He also opened a number of gyms and created Zinkin Fitness International, a fitness consulting business. Zinkin sold his Universal Gym Machine Company in 1968 and subsequently devoted his energy to the development and sale of real estate in the Fresno area. A concluding aspect of Zinkin's personality: He and Joe Gold were mentors to Schwarzenegger, guiding him in the obsessive pursuit of bodybuilding. They sometimes performed hand-balancing stunts together on "Muscle Beach." "Harold was a great mentor," Governor Arnold Schwarzenegger said when informed of Zinkin's death in 2004 at the age of eighty-two. "I am deeply indebted to him for his friendship and the counsel he gave me."