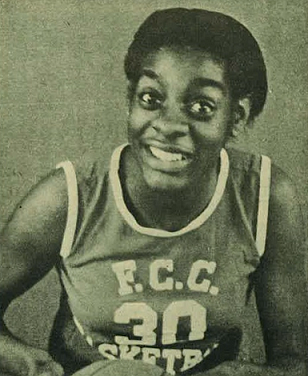 In 1975, Connie Gooch became the first woman from Fresno to receive a full college scholarship to play basketball. Believe it or not, she had only been playing the sport for two years.

Connie Gooch was born in France in 1957. The daughter of a sergeant major in the army, she and her five siblings grew up on military bases. It wasn't until 1973 when the family moved to Fresno. At that time, Gooch was about to enter her junior year of high school.

Connie Gooch grew four inches in the summer of 1973. She was 5'11" when she showed up for her first day at Hoover High School. In her words, she was "tall and lanky." It did not take long for her to be asked to try out for the girls basketball team.

Gooch had been a track athlete, so she could run and she could jump. She could not, however, shoot! She attended basketball tryouts anyway, and she made the team.

During the 1974 season, the Hoover girls basketball team went 11-1 and won the school's first-ever section championship. Connie Gooch played well, but she played even better the next season. As a senior, she averaged a double-double (18 ppg, 11 rpg) as the Patriots won a second straight section championship over San Joaquin Memorial.

Connie Gooch was recruited to play college basketball by both UCLA and UNLV. She chose the Rebels, and she came off the bench for them as a freshman during the 1975-1976 season.

In November of 1976, Gooch withdrew from UNLV. She moved back to Fresno for family reasons, but her basketball career continued. In January of 1978, she played on the first-ever women's team at Fresno City College. She averaged a double-double for the Rams (20 ppg, 14 rpg) and led them to a league title.

After her one season at FCC, Connie Gooch transferred to Fresno State. She played two seasons for the Bulldogs, 1978-1980, averaging 15.2 ppg.

Connie Gooch once recorded 30 rebounds in a game (at Hoover). She also played in the first-ever City-County all-star game for girls, she coached at Edison for a couple of years and she started the Fresno chapter of BEUFE (Black Employees United for Equality).