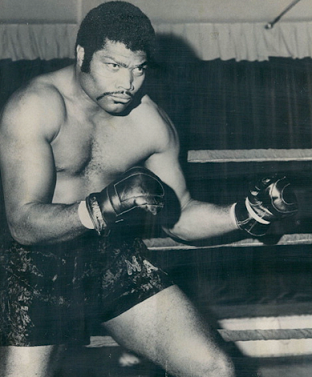 On April 1st, 1972, Muhammad Ali won a 15-round fight in Tokyo by unanimous decision. His opponent was Mac Foster, whom Ali predicted he would beat in five rounds.

Mac Foster was born in Louisiana in 1942. And "Mac" is short for "MacArthur"; he was named after General Douglas MacArthur of the United States Army. Foster comes from a military family, and that family relocated to Fresno when he was approximately two years old.

Mac Foster joined the military himself after high school. He attended Washington Union, and he actually turned down a track & field scholarship to Fresno State to enlist in the United States Marine Corps.

Foster served in the Marines during the Vietnam War. He was a sergeant, stationed in Osaka, Japan.

And it was in the military where Foster started boxing. He had Ken Norton as a regular sparring partner, and he would win 14 amateur titles while in the service.

After a military discharge, Mac Foster turned professional in 1966. That decision was against the advice of those closest to him, who recommended that he choose a career in law enforcement.

It was at that point when Mac Foster started referring to himself as "Dynamite Mac Foster." He also had the nickname "The Knife," which had been given to him by a reporter from the Los Angeles Times.

Mac Foster retired from boxing in 1976, though he did attempt two different comebacks in the early 1990s. He has a career record of 30-6, with all of those wins coming via knockout. He has fought in the Grand Olympic Auditorium in Los Angeles and in Madison Square Garden in New York City. He also fought quite a bit at Selland Arena, where he won more than half of his fights (18).

Mac Foster, a husband and a father of four, enters the Fresno County Athletic Hall of Fame posthumously; he passed away in 2010.