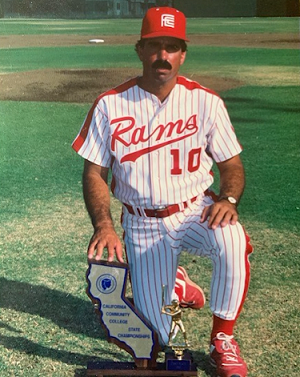 He also won a total of 1,100 games and when he retired after the 2022 season, he did so as the winningest coach in California community college history.

Ron Scott grew up in Woodside in the Bay Area. He was a multi-sport athlete in high school, winning all-league honors in both baseball and football. After high school, he attended Cañada College in nearby Redwood City; he played baseball for the Colts and he was an all-conference catcher, in addition to being the team captain and team MVP.

In 1974, Scott transferred to the University of Miami. The Hurricanes went to the College World Series that year, their first-ever appearance in Omaha. They were the national runner-up and Scott made the all-tournament team.

Ron Scott would play one more season at Miami. He then played one season of professional ball for the Portland Mavericks in the Northwest League before he began his transition into coaching.

In 1977, Ron Scott came to the central valley to be the head baseball coach (and head football coach, and head wrestling coach) at Chowchilla High School. He spent four years there, winning three league titles. He then spent six years coaching at Madera High School, adding one more league title to his resume, before taking the job at Fresno City College.

Scott was at FCC for 34 years. In 25 of those years, his teams won 30 or more games (including a 45-win season in 1992, the best in school history). He won 23 league titles and made it to the state final four on nine different occasions. He also coached eight players who made it to the major leagues.

On May 7th, 2022, Ron Scott coached his last game at Fresno City College.

“I know I still have the passion to coach and everything," he said. "It’s just time to move on and be a grandfather and be more involved with my family.”

Ron Scott is the father of Amanda Scott, a former all-American pitcher at Fresno State who won a national championship with the Bulldogs in 1998. His other daughter, Courtney, was an all-American catcher at Cal and she was the 2021 and 2022 SEC Softball Coach of the Year at Arkansas.