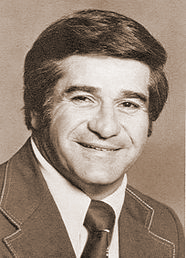 When Sam Boghosian left the Fresno County Hospital at twelve following an eleven-month struggle with polio, his doctor gave him a grim prognosis: "You will always walk with a limp and you will never run." Even though his right calf is an inch and a half smaller than his left, Boghosian was able to play basketball in junior high, football and baseball in high school, and four years of football at UCLA. Polio impacted much of the Boghosian family. Sam's sister died in 1942 on the same day that Sam and his older brother were hospitalized with the dreaded disease. All of the stress of ten-hour work days on the ranch, plus a night job as a lithographer for a newspaper, his daughter's death, and his oldest son who was a prisoner missing in action was too much for Sam's father. "Dad woke up one morning, did his exercises, and dropped dead of a massive heart attack. He was only forty-seven," Boghosian said. "My mother had no choice, but to sell the ranch and move to Fresno. When we moved to Fresno and I got to Hamilton Junior High, it was the first time I touched a baseball, football, or basketball. The years working in the fields had a lot to do with my recovery from polio. I was able to run, but quickness rather than straight-ahead speed was my biggest strength. It [quickness] helped in all sports."

That agility, a solid 200-pound body, good grades, and All-City honors at Fresno High School convinced legendary UCLA football coach Red Sanders to recruit Boghosian. In his sophomore season, Boghosian started at right guard for the Bruins who only lost one game in 1952 to USC 14-12. The following season, the only loss was 21-20 to Stanford. In 1954, the 9-0 Bruins were voted for the first time in the school's history as national champions by United Press International. The Associated Press named Ohio State, so it was a shared title. The Bruins led the nation in offense and defense. They allowed only forty points, twenty coming in a game with Washington. UCLA opened the season with a 13-7 win over defending national champion Maryland. They recorded five shutouts including USC 34-0 and Stanford 72-0.

Tailback Primo Villanueva, fullback Bob Davenport, guard Jim Salsbury, and tackle Jack Ellena were First Team All-Americans. Boghosian was among seven who received All-American mention. Villanueva fumbled three punts against Washington, allowing the Huskies to recover deep in Bruin territory in the only close game. Boghosian chuckled when he recalled that 160 Sam Boghosian after the third fumble, Sanders told the frustrated Villanueva: "One more fumble and you go on waivers."Boghosian has warm memories of that team. "I weighed 209 pounds and was the third biggest player on the team. Salsbury was 213 and Ellena, 220. Our center, Peterson, was 209. Sanders had a unique system. After two weeks of hard two-a-days prior to the start of the season, he would have a CPA weigh us. That's the weight that went into the program. I was 196, but by the first game, I was 209. That way, Red could moan about how small we were. Anything to try and catch opponents off guard. We used to serpentine out of the huddle, so sometimes I was the weak side guard and sometimes the strong side."Sanders hired Boghosian as an assistant following his senior season.

When Sanders died suddenly in 1958, Sam stayed on with the Bruins until 1964 when Dee Andros of Oregon State lured him to Corvallis as an assistant. I had a wife and two children, so I was happy to get out of the Los Angeles environment" Boghosian said. "The nine years I spent in Corvallis were the greatest years for our kids. My son went to the University of Washington and my daughter to Cal Poly, San Luis Obispo." Boghosian was offered a lifetime job at Oregon State as head coach, had finished second twice in the quest for the University of Oklahoma head coaching job, and second once at Fresno State before Sid Gillman called him to the Houston Oilers in 1973. Boghosian said he always respected Gillman for his passing game knowledge with the Rams and Chargers, so he entered the NFL. After one season, Gillman quit after a squabble with team owner Bud Adams and Bum Phillips took over.

The Seattle Seahawks called to interview Boghosian for the head job, but good friend Jack Patera was chosen. Patera wanted Boghosian to be his offensive coordinator, but a call came from Oakland Raiders owner Al Davis to interview to replace John Madden. "Davis was right up front and told me he might stay within the staff, but he interviewed me and said regardless of who is picked, he would like me to be the offensive line coach. The next day, I received a phone call from Davis saying he stayed in staff and asked if I knew Tom Flores? "Know him! We grew up together," Boghosian answered. "I get a call from Tom and he wants me to be his offensive line coach. He hasn't been able to get rid of me since. I lived in Moraga and he lived in Lafayette. When the Raiders moved to Los Angeles, we both had homes a block apart in Manhattan Beach. We both retired in 1987. He built a house at Indian Wells [Palm Springs] in 1997 and, two years later. I moved into one two blocks away. We have coffee together almost every morning and play golf. Great guy and a great coach." The same could be said about Boghosian: great guy great coach.