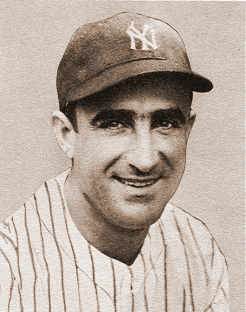 Frenchy Bordagaray, a former Fresno State football star from Coalinga who ended up playing eleven years in the major leagues, was one of the most colorful performers in an era of free-spirited players. It was the 1935 and 1936 seasons with the Dodgers where most of his zany antics occurred.

In an interview with Bordagaray in the 1980s, he recounted the pranks that he pulled on Stengel. Once, he was on second base and the batter lined a single to left. The outfielder made a perfect throw home and when Bordagaray saw Giants catcher Gus Mancuso had the ball well short of the plate, he turned and walked back to his dugout. Stengel was furious and fined him. When the Frenchman suggested Stengel should be fined for waving him home, he was socked with another fine. On another occasion, Stengel fined him for not sliding into second on a steal attempt. Later in the game, Bordagarary hammered a home run. He slid into first and second with Stengel chasing him. He made a slide into third and then a swan dive into home plate. The home run cost him for showing up Stengel.

In 1936 when Bordagaray reported for spring training, he had a small mustache. Someone suggested he let it grow into a handlebar. Bordagaray did so and added a goatee. After two months, Stengel told him to get rid of it. Stengel added: "Frenchy, if there's gonna be any clown in this club, it's going to be me." The stories belied the fact, as Stengel said in later years, that Bordagaray was a fine player and an exceptionally good hitter. Stengel loved his hustle and competitiveness. In the two seasons under Stengel, Bordagaray batted .282 and .315. He played two years of third base for the St. Louis Cardinals as an outfielder and third baseman. Where he really sparkled that season was as a pinch hitter where he was the best in the league, with twenty hits in forty-three at bats. He played for Cincinnati in 1939 and with the Yankees in 1941. In the latter two seasons, he appeared in two World Series going 0-3, but still took home the winner's share of the proceeds. His lifetime average for eleven seasons was .283. In 1944, he played 130 games for the Dodgers, hit .281, and was the regular third baseman.

Frenchy's major league debut might have been later if he had listened to his father who wanted him to return to Fresno State. He had an electrifying football performance, leading the Bulldogs to their first unbeaten season and a Far Western Conference title. The 5'7", 175-pounder also played on Stan Borleske's basketball team. His ability in the Fresno Twilight League and Valley League games caught the eyes of baseball scouts. He made the decision to sign with the Sacramento Solons despite his father's wishes that he stay in school. His father gave in to his strong-willed son. "He wants to play ball for Sacramento, so what can I do," said the elder Bordagaray. "There is no gold playing in college; he wanted to go for the bucks." The decision broke the hearts of Bulldog fans, but Bordagaray predicted in an interview with Sacramento Bee sports editor Rudy Hickey that he would lead the league in hitting. He signed February 28, 1932 and was hitting .350 when he came up with a lame knee. He continued with the Solons until he was called up to the Chicago White Sox for the final twenty-nine games of the 1934 season. His average was.322. The following season, he signed with Brooklyn.

Bordagaray had to deal with the fact that he played on some very poor ball clubs. Stengel's Dodgers finished fifth in 1935 and seventh in 1936 when there were only eight teams in each league. In regaling about the antics of his day, Bordagaray lamented the change in focus in many of the high-salaried players of the 1970s and 1980s. "They are too serious, more concerned with salaries and the stock market than just having fun playing the greatest game ever invented. After all, it is just a game."