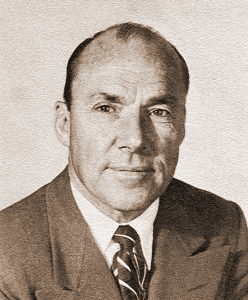 Jimmy Bradshaw earned his nickname because of the way he outran tacklers at the University of Nevada and later in semi-pro and professional football. Bradshaw had a keen football mind honed from a year under the University of Illinois coach Robert "Bob" Zuppke and as an eight-year assistant to Stanford coach Glenn Scobey "Pop" Warner. Bradshaw brought Warner's double-wing formation with some of his own variations to Fresno State as head coach in 1936.

In eight seasons, he compiled a record of 60-18- 6 which is still the highest Winning percentage in school history. In 1939, his Bulldogs were 9-1-0 with a lone loss in a nationally-recognized game against San Jose State where Leroy Zimmerman ran and passed the Spartans to a 42-1 victory. Bradshaw's 1942 team won its first seven games, but was then derailed by the University of San Francisco led by Neil Sheridan. The following week, Fresno edged San Jose 6- 0 and finished with a 27-6 win over Loyola who had defeated USF.

World War II interrupted Bradshaw's career for two years. When the war ended, he returned for one season before resigning to become director of the Fresno City Schools physical education, health and recreation program. He was credited with designing one of the finest P.E. programs in the state. Bradshaw was also in constant demand as a motivational speaker. Bradshaw was born June 23, 1898 on a farm in Green County, Missouri and was three when the family moved to Kansas City. He was 127 pounds when he reported for football at Illinois and was proud of the fact that he made the varsity. He couldn't handle the tuition and housing costs, so he completed the first year at Pittsburgh Normal. In 1919, he came west to play at Nevada. Bradshaw had bulked up to 135 pounds when he reported for the Wolf Pack and that was the weight that he played at for most of his collegiate career. He added another ten pounds when he played for the Olympic Club and professionally.

Bradshaw gained 3,120 yards in three seasons from 1920 to 1923 at Nevada and was placed on the All-Western team even though Nevada was a small school. Sports writers in those days said if Bradshaw had played for the University of California with its precision blocking line, he would have set records that no one could touch. Nevada did play the Golden Bears and were trounced, but all the media talk was about the 141 yards that Bradshaw gained against one of the great teams of that era. Bradshaw was the quarterback and the offense revolved around him.

Bradshaw also captained the Nevada basketball team, was the intercollegiate tennis champion of Kansas in 1918, and twice won the Nevada state tennis title. After his retirement, tennis became his favorite sport and he played well into his later years. Following his graduation from Nevada, he moved to San Francisco where his job was coaching at Redwood High School, but he represented the Olympic Club on weekends. He was chosen to play in the first East-West Shrine game in 1925. In 1926, Bradshaw signed with the first traveling professional football league promoted by Charlie "Cash and Carry" Pyle. He began the season with George Wilson's Wildcats and finished with Red Grange's New York Yankees. Bradshaw organized the professional San Francisco Tigers in 1927 and was the player-coach. The Tigers tackled a four-game series with a squad built around superstars Grange, Brick Muller, Ernie Nevers, and Benny Friedman. Bradshaw's Fresno State teams earned recognition for their "quick strike." Fresno's first possession often ended with a score, sometimes on the first play. Bradshaw utilized the passing game highlighted in 1942 when quarterback Jackie Fellows was named to Bill Stern's First Team All-American.

How different would history be if Bradshaw had been Oregon's choice in 1938? Bradshaw was said to be the front runner for the head job. He flew to Los Angeles to meet in secret with Oregon President Donald M. Erb and Oregon Board of Athletic Control James H. Gilbert. The candidate list was trimmed to Bradshaw and Tex Oliver. Oliver was chosen. In 1946, Bradshaw had high hopes since Fellows, Jack Kelley, and Mickey Masini along with several 1942 teammates, returned. He also had recruited other highly touted players. However the war had zapped the energy and passion for football of many key players and Bradshaw resigned with an 8-4 record which he said, "was one of the disappointments of his life." He and his wife traveled around the world and he wrote articles in The Fresno Bee about his many experiences. Bradshaw was a most delightful person to be around and contributed greatly to Fresno.