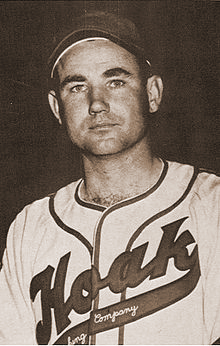 Hal Britton is arguably one of the best fast-pitch softball players in the nation. Britton was the catcher for six national tournament Hoak Packers teams and was chosen All-American in five of these contests where his team won four times.

Britton also was an outstanding baseball catcher and infielder with professional offers, but in 1972, he opted for a different job with the Fresno Police Department. He held every rank in the organization, including six years as police chief before his retirement. "Softball in my days with the Hoaks was mostly pitching and we had the best with Zimmerman and Les Haney. Britton recalled. "When you reached the Nationals, you need to score runs and I could hit good pitching. I played some shortstop on the Roma Wines team, but with the Packers the last five years, I caught every game. Not too many people could catch Haney and Zim. They had different styles. Haney could just overpower you. He could throw it up or down. Zim was smarter and worked around batters. They both would strike out twenty batters a game."

Britton said the second or third year that the Fresno Hoak Packers were together they had a perfect season. They won the National Softball Championship in 1950, sweeping all five games in Greeley, Colorado. They won the International Softball League Nationals in 1951 and 1952 and lost to the Long Beach Nitehawks in 1953. In 1954 under the banner of the Selma Hoak Packers, they defeated the Dinuba Condors for their final ISL championship played in Selma before crowds of upwards of 10,000 people. Britton said the league folded before the 1955 season because teams couldn't afford to pay the premier pitchers big salaries.

In the beginning Britton was born in a house only a block from Holmes Playground. It was during the Depression when Britton was seven that his father died. Britton went to Roosevelt High School and was All-City in football, basketball, and baseball. He also played in the Fresno Twilight League from the time he was fifteen years old with the Plantation Club. He pointed out that in a town of just 55,000 people, there were 5,000 fans crammed into Holmes Field for the Twilight League Little World Series. The Twilight League was the incubator for a number of local professional players, some of whom made the major leagues. The 165-pound Britton never thought he was big enough to catch professionally.

In 1949, Fresno promoter Al Dermer put together a team which included pitchers Bob Feller and Mike Garcia of the Cleveland Indians and Coast League rookie, Gus Zernial. They played Luke Easter's All-Stars in Fresno. "This was October and I hadn't touched a baseball in two months, but Pete Beiden called and wanted me to catch Feller," Britton said. "He convinced me to play and I caught Feller for three innings, Garcia for three innings, and Vic Lombardi for three innings. We won before a very small crowd, but we brought Easter's team back a week later and we won again." That was the first time Britton met Zernial and the two have maintained a close friendship.