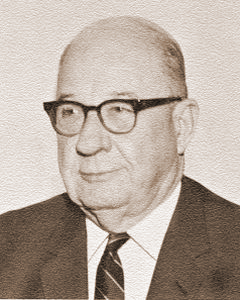 Thomas J. Carothers-"Soup" as he was known to his large circle of friends-did not reach Fresno until 1941 when he opened the Mid-Valley Sports store. The native of Franklin, Tennessee was a center in football and he played for the U.S. Navy team in Honolulu for four years. His next stop was the powerful San Francisco Olympic Club in 1925. That team was undefeated and among its victims were the mighty University of California "Wonder Team" and Stanford University. Not finished with football, he enrolled and played for three years at St. Ignatius College which later became the University of San Francisco. He was team captain in 1928 which was the year that the school changed names. A year later, he entered the sporting goods business. During his time in Fresno, he was involved in several civic organizations that sponsored sporting events for city youth. He was the first president of the Greater Fresno Youth Foundation. For years, he hosted the Fresno State football coaching staffs for pre-training meetings at his large Huntington Lake cabin.