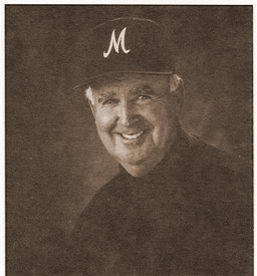 Merv Carter was part of the first Fresno State baseball team to compete in the College World Series, coached for twenty-seven years at Clovis and McLane High Schools, and ran the annual City-County baseball game. His high school teams won 425 games including six league titles and two Valley Championships, making him one of the most successful coaches in Central California.

As a prep player, Carter's Oakland Tech High School team snagged three championships and he was an All-Northern California outfielder for Oakland City College. He met Fresno State coach Pete Beiden at a Fresno State/Berkeley game. "Pete convinced me to come to Fresno State for tuition and a job," Carter said. "My job was to provide ice for the snack bars at Ratcliffe Stadium during the football season. I loved Pete and learned so much from him which helped me when I coached. He would correct you, but always put his arm around you and held your wrist."

In his second season at Fresno State (1958), the team-largely unknown-made its first trip to Oklahoma for the College World Series. Carter played another season for the Bulldogs and then began his seven-year coaching career at Clovis High. He had a huge role in the construction of Lloyd Merriman Park on the campus. Carter said Clovis District Superintendent Floyd "Doc" Buchanan allowed him to build a state-of-the-art stadium with sunken diamond (copied from Stanford), major-league dugouts, foul poles, and stands to seat 2,000 spectators. Carter spent the rest of his coaching years at McLane and was also an assistant football coach for eighteen years which included McLane's Valley Championship season.