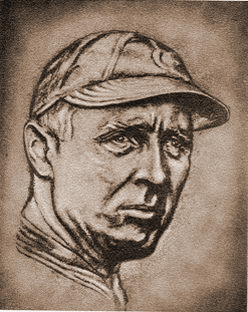 Frank "Husk" Chance, later called "The Peerless Leader," is one of only two Major League Baseball Hall of Fame members to come from Fresno. Chance was inducted in 1946, followed in 1992 by fellow Fresno High School graduate Tom Seaver. Chance was born on September 9, 1876 in the tiny town of Salida, outside of Modesto. A year later, his father moved the family to a ranch on the outskirts of Fresno before the city was incorporated. Chance, who was 6' and 190 pounds, was so intimidating in football at Fresno High School that people said he was tough as a corn husk.

Chance's major league career spanned seventeen seasons as a player and manager. He played in 1,223 games and had a lifetime batting average of 297. He only hit twenty home runs, but had 199 doubles and seventy-nine triples. He drove in 596 runs and scored 797 times. Chance batted .310 in four World Series including 8-19 in 1908. His stats would have been even better had he been healthy. In 1901, he was limited to sixty-nine games because of a broken wrist. In 1909, he fractured his shoulder and missed a portion of the season. Two years later, he sprained an ankle and only played thirty-one games. His success continued as a manager with his Chicago Cubs winning four pennants and two World Series titles.

Chance's parents had hoped he would follow in his father's footsteps and become a banker, but his love of baseball won. He played at every opportunity, first as a sand-lotter in Fresno, then at Fresno High, and later with several semi-pro and amateur teams. He had trouble settling on a position. Chance pitched for the Fresno Republicans, switched to catcher with the Fresno Tigers, and finally was signed professionally as a catcher in 1898 by Chicago Cubs scout Bill Lange. He then traded the catcher's mitt and outfield glove for a first baseman's mitt and stayed there the rest of his career. Chance was speedy as well as versatile, stealing a league-leading sixty-seven bases in 1903 and also was best in the league in 1906 with fifty-seven stolen bases. An excellent fielder, Chance with bandy-legged, 125-pound second baseman Johnny Evers and shortstop Joe Tinker were forever immortalized in "Baseball's Sad Lexicon" by New York Evening Mail's Franklin P. Adams: These are the saddest of all possible words: "Tinker to Evers to Chance." Trio of bear cubs and fleeter than birds, Tinker and Evers and Chance. Ruthlessly pricking our gonfalon bubble, Making a Giant hit into a double- / Words that are weighty with nothing but trouble: "Tinker to Evers to Chance."

Baltimore had offered Chance more money than Chicago to sign, but Chance felt there was better opportunity with Walt Anson's Colts as they were called because the team had only one catcher, Tim Donahue. Chance's best break came after the Cubs hired manager Frank Selee in 1903. When the team went to Santa Monica for spring training, Selee's plan was to have Chance understudy Johnny Kling, the great Cub catcher. On the way to Chicago, first baseman Bill Hanlon quit the team to go home. Selee asked Chance to take over until a suitable replacement could be found. In 1904, Selee was so enamored by Chance's play that he declared: "Frank Chance is the greatest ball player in the world. He's the best fielder, good batsman, and baseball player." Selee became ill midway in 1905 and owner Jim Hart appointed Chance manager. The Cubs were in fourth place at the time and they finished playing .667 ball for the last eight weeks and climbed to third. When the Cubs added pitchers Jack Pfiester and Visalia's Orval Overall to the roster the next year, the team won a major league record 116 games and lost only thirty-six. The Cubs finished twenty games ahead of the Giants. What Selee had said about "Husk" as a player was also true of him as a player-manager.

Somehow, Chance's 1906 team lost to the crosstown Chicago White Sox, dubbed the "Hitless Wonders," in the World Series, but the Cubs defeated Detroit for the world title in 1907 and 1908. In his prime as a manager, he was firm, but fair and would back up his words with his fists. It was said he could lick any player that he ever managed. Chance died prematurely in 1924 at the age of forty-seven.