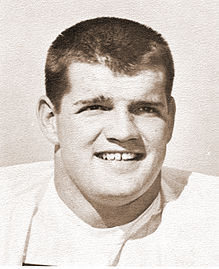 Monte Clark was an outstanding football player and earned fourteen athletic letters at Kingsburg High School. He was a three-year starter at tackle for USC and Trojan co-captain in his senior year. Clark was a three-year defensive tackle for San Francisco, a year as an offensive tackle for the Dallas Cowboys, and seven years as offensive tackle for the Cleveland Browns when they went 69-27-2 and won five division titles and a world championship. Clark spent one year as head coach of the 49ers and seven years as head man of the Detroit Lions. With all those achievements, experts like the late 49ers coach Bill Walsh stated Clark will be remembered best as the six-year offensive line coach of Don Shula's Miami Dolphins.

Powered by one of the top running attacks in NFL history, the Dolphins won sixty-seven games and lost Sixteen games in that span, won six division titles, and were back-to-back Super Bowl Champions. With the defeat of the New England Patriots, the 1972 Dolphins at 17-0 remain the only single season unbeaten team in NFL history. In a conversation between late coach Bob Walsh and former Detroit Lions coach Ric Forzano, Walsh made this unsolicited comment: "Monte is one of the best line coaches I know...Actually, he is the best line coach I have ever known." Forzano told Monte "that is a tremendous compliment from one of the greatest coaches of all time." The Dolphins offensive line, nicknamed by Clark as The Mushrooms," were composed of five free agents, all of whom went all-pro during Monte's tenure. Three were nominated for the NFL Hall of Fame in Canton and two-Larry Litle and Jim Langer-made it. Bob Kuechenberg has been nominated three times. Clark gained a reputation as an outstanding motivator and teacher.

Clark was born in Filmore near Kingsburg and lived in Bloomfield, Michigan where he served as a consultant for the Lions. He married a Kingsburg girl, Charlotte, and had three children and eight grandchildren. In a telephone interview, Clark singled out highlights of a remarkable career. In high school, he was one of the top discus throwers in the state. Clark was a junior when Rafer Johnson was a sophomore. Monte said, "Rafer was a world class athlete and a world class person." In Clark's senior year, Kingsburg lost to Lindsay 3-0 in the football opener, tied Dinuba 6-6 in the fog, and won the rest including a 53-0 payback to Lindsay in the 100 Monte Clark playoffs. Clark was the MVP defensive player in the first annual Fresno County/City All-Star game. Being from a small school didn't detract recruiters, especially since he was 6'5" and 255 pounds.

More highlights followed at USC, Clark arrived a little overwhelmed by the size and the credentials of Trojan recruits. "We didn't have any CIF All-Star teams at that time just valley selections, but all the southern California recruits were all this or that in the top bracket. The first time I drove to USC on the Harbor Freeway, I got lost in Chinatown and when I finally found Marks Hall, I sat in the car for a time and contemplated whether I should get out or drive back to Kingsburg if I could find it. I soon became comfortable and made some great lifelong friends in football. He played for coaches Jess Hill and Don Clark. John McKay had just taken over after Monte completed his eligibility and he formed "The No Name Seniors" basketball team which won the University Intramural League.

A highlight from his time in the NFL included being drafted in the fourth round by San Francisco in 1959. He was the starting defensive tackle and also played some offensive tackle in three seasons. He suffered a neck injury which he feared might end his playing days and was traded to Dallas. He switched to offense and his injury held up. After one season, Clark was traded to the Cleveland Browns for All-Pro guard Jim Ray Smith. Clark was the starting offensive tackle for the next seven years and played with the great Jim Brown. Those were glory days in Cleveland when the Browns were 69-27-2, winning several division titles and one World Championship in 1964. "Brown was a fabulous back: big, fast, and strong."Clark retired in 1970 after eleven years as a player and joined Shula, who was the winningest coach in NFL history, at Miami. The Dolphins broke the NFL all-time rushing record, had two 1,000 yard backs in a single season, Mercury Morris and Larry Csonka, and won back-to-back Super Bowls. Clark was hired by San Francisco as head coach and director of football operations for a team that was 4-8 the previous season. Clark only served one year of a four-year contract. He moved to the Detroit Lions and his 1983 team won the first division title in twenty-six years. Up until the time that he took the Lions job, he had played on or coached on NFL teams that had won 220 games and lost seventy-three with three ties. Clark spent a few more years with Shula's Dolphins in the front office and as an assistant coach for Walsh at Stanford and Doug Cosbie at California before heading back to Michigan.

Shortly after attending the Fresno Athletic Hall of Fame's 50th anniversary dinner, Clark died in September 2009 at the age of seventy-two.