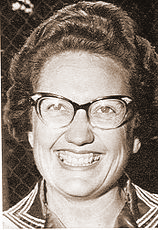 Jeanne Contel was a standout for the Fresno Rockets amateur softball team, playing in a bygone era when the team was popular entertainment and business sponsors sent the squad traveling throughout the United States. Contel competed fourteen years for the Rockets beginning in 1951 and was known for her prowess at third base and RBls. She was elected to the Amateur Softball Association Hall of Fame in Oklahoma City in 1969. As a Fresno Rocket, Contel was part of the team's world championships in 1953, 1954, and 1957. "I think one of my biggest thrills was when we won that first championship,"Contel said. "We defeated Orange, the defending champions, and a great team."Contel loved the challenge of hitting with people on base. "I wasn't a high-average hitter, but I did drive in a lot of runs, she said. She said one of her career highlights was hitting her first national tournament home run which she slammed over the fence in Toronto.

Many diamonds at the time, including the Rockets' home field at Holmes Playground, did not have fences. She said she misses the relay plays of her era, when there were no fences to signal automatic home runs. Contel said much has changed with women's softball since the no-frills time she played in. "I look at kids today playing and they get to fly in planes to away games, everything on a silver platter," she said. "I wouldn't trade when we played for anything. Because, you know, there were so many good teams. [There was] nothing else to do then, so softball was big time." She recalled crowds of 400 to 800 fans at Holmes Playground near downtown Fresno and lamented the demise of company-sponsored softball teams and adult travel teams. It was a far different and much simpler era. Contel said players were allotted $2.50 a day for food when traveling. Sometimes, players would pool their money and splurge on fried chicken. Contel said the team managed to attract sponsors including Betsy Ross Grape Juice. "When someone hit a foul ball, if the fan gave the ball back, they got a bottle of Betsy Ross Grape Juice which was horrible tasting. Contel said.

Local businesses would often sponsor individual players, giving them S150.00 for the year to help cover uniforms a First Team All-American for five years 1958 Championship Record: 21 Assists Played in l1 National Championships other costs, but when the team needed to fly to Stratford, Connecticut in 1958 for the championships, team members didn't know how they would come up with the money for airfare. Eventually, local companies stepped forward to help out and the team scraped together enough to fly for the first time to a tournament. Most of the time, the team traveled by car.

When we won in Toronto, we had this huge trophy to bring home. We also had fifteen individual trophies in boxes all padded, very nice. The big trophy rode between the beds in the back. So we had to squeeze our way in. "When the team would hit the road, Contel, who always enjoyed drawing, would decorate the car windows with stick figures and slogans like "Toronto or Bust" and "Fresno Rockets from California." Other travelers would respond to those signs. Many folks had heard of the Rockets, but didn't know where Fresno was. She recalled driving into Oklahoma City and stopping for breakfast. "A big guy knew someone in Fresno, so he wanted to see us," Contel said. "We didn't know his friend, but he bought us breakfast which was kinda neat."

When the Rockets traveled to Connecticut for the national championships, raisin industry representatives sent packets of raisins which the team tossed to fans in the stands. "They were great fans anyway, but when we started throwing those packages to the fans, many started rooting for us against their own team," Contel said. Contel was born in Oakland and knew of and liked Fresno after spending time at a friend's parents' farm east of town. While playing softball in the Bay Area, the Fresno Rockets recruited her. Contel's goal was to teach in a rural school, so she landed a job in Caruthers and began playing for the Rockets. Contel later taught at Roosevelt High School, eventually becoming Dean of Girls across town at Fresno High School. She was late promoted to principal, serving in that post for eleven years. Playing for the Rockets, Contel said, had a significant impact on her life. "It opened a lot of doors for me." she said. "It gave me name recognition. I got to play on a nationally recognized team, and made it to the national hall of fame.