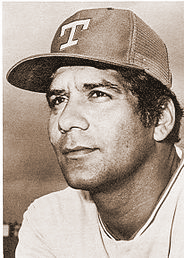 Pat Corrales marked his fiftieth year in professional baseball in 2008. He has served as a player, scout, coach, and manager in the pro ranks of our national pastime. Pat was the catcher on the legendary Fresno High School baseball team of the late 1950s. "I think we lost one game in two years, something like that, and it was a big honor just to be on the team. People kind of forget some of the players like Dave Albracht, Chuck Smith, Blair Pollard, and others, but they remember Jim Maloney, Dick Ellsworth, Len Rube, and I guess, Pat Corrales, but it was a heck of a team there right through the roster." Pat said recently, "I got a big kick out of the fact that the head coach at UCLA, Art Reichle, tried to recruit all of us to go to UCLA because USC was the big powerhouse at the time, and some guys did go with the Bruins. I think, if I am not mistaken, we still hold the national record for the most consecutive wins for a high school team. Ollie Bidwell was just a great coach."

"Back in those days, there were no restrictions about how much players could practice or play," Corrales remembers, "I mean we played all the time. We played American Legion ball together, we played high school ball together, semi-pro together, same guys, same team We just changed uniforms-same coaches, same pitchers, same catchers, heck we just played a whole lot of baseball. And at that time, you hadn't even heard about Tom Seaver yet. He was a freshman when I was a senior. And then Dick Selma, and the rest that came after us, I'll tell you, Fresno High was a baseball phenomenon."

After his high school days of playing football and baseball at Fresno High, Pat signed with the Philadelphia Phillies and went off to Johnson City, Tennessee to begin his career. "Probably the saddest time in my life is when I left," says Pat, "I had never been away from home before and it was really a shock [laughs], but I really enjoyed Fresno and that time of my life." Pat was asked why there have been, and still are, so many professional baseball players from the Fresno area. "I don't know. It's conducive," said the former Warrior, "When I went back east to the rookie league, I was talking to guys from like Massachusetts, New York, or Pennsylvania, you know, where they were playing fifteen games a year. I told them we would play like fifteen games in two weeks or so in the Valley," Pat laughed as he said, "They wouldn't believe me, but if you look at it at the time, and it probably still is, the great breeding ground for baseball talent is California and Florida."

On August 2, 1964, Pat Corrales broke into the major leagues with the Philadelphia Phillies. He spent eight years in the major leagues as a player for the Phillies, the Cincinnati Reds, where he was teammates again with Jim Maloney, this time for "three or four years including a trip to the World Series and that was a big thrill," and then he finished off his playing days with the San Diego Padres in 1974. Coaching had always been goal for Pat and he was also a manager for nine years in both the American and National leagues with the Texas Rangers, the Phillies, and the Cleveland Indians, winning a total of 572 games. In 1990, two days after Bobby Cox took over as manager of the Atlanta Braves for the second time, he hired a buddy from his Fresno High playing days, Pat Corrales, to be the Braves first base coach and bench coach. Pat stayed with the Braves and Cox for seventeen years including an amazing stint of fourteen consecutive years of winning the National League East division, fifteen championships in all, along with the World Series in 1995. "Bobby and I were together in Atlanta for seventeen years and it was a great ride. He's the boss and a great friend of mine. I have the utmost respect for him, and to me, he is the best manager in the big leagues and has been for a long time."

In 2006, Pat had both of his knees replaced. The road back was not an easy one for the sixty-five year old coach, but he worked hard and continued coaching the Braves, hitting infield practice and working as the bench coach. In 2007, he went to the Washington Nationals where he is still coaching. Pat lives in Big Canoe, Georgia with his wife, Donna. He also has five children, Rene, Michelle, Patricia, Jason, and Pat.