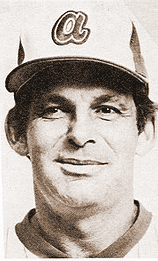 Bobby Cox, the winningest manager in Atlanta Braves history, reminisced in the Braves dugout, "Selma and Fresno were as good a place to grow up as a kid could ever want. It was a sports-orientated farming area. You could play a high school football game on Friday night and take batting practice Saturday morning and that's just what we did in those days. I was lucky to have such a great setting for family life there, and, of course, if you liked sports, it was year roundbecause of the weather. A lot of great athletes came out of that area and, right away, I think of Bob Mathias and Rafer Johnson, the decathlon champions."Bobby Cox believes it was just that everybody thought about sports in the Central Valley in those days. "All the farmers loved sports and we had the major colleges that took a lot of our athletes...Scholarships were a big deal and, if you were lucky enough, you could get a free education, so there was a reason to play sports, but mostly it was just fun."

The former Selma High School athlete continued to play baseball at Reedley College and, in 1959, the Los Angeles Dodgers signed Bobby and his professional career was underway. He was in the Dodger system for seven years and was traded to the Braves. Atlanta traded him to the New York Yankees in 1967 where he played third base throughout the late 1960s. After his playing days were over, Bobby became a coach in the Yankees farm system. In 1976, Cox led the Syracuse Chiefs to the Governor's Cup, the award given to the top team in Triple A baseball. In 1977, Bobby was the Yankees first base coach for Billy Martin when the Yanks beat the Dodgers, four games to two in the World Series. In 1978, Bobby got his first major league manager's job with the Atlanta Braves. In 1982, he was hired by the Toronto Blue Jays where he led that franchise to their first American League East championship in 1985 and won the AL Manager of the Year Award. In 1986, Ted Turner coaxed Bobby back to manage the Braves and that's where the fourth most successful manager in the history of major league baseball would stay for the next two decades. Under Bobby Cox, the Atlanta Braves have won fifteen National League division championships, fourteen of them consecutively plus an NLPS championship and a World Series in 1995. Going into the 2009 season, Bobby had won 2,336 major league games, fourth on the all-time list, and became the sixth manager ever to manage over 4,000 games. He was the National League Top Five All-Time

Manager of the Year in 1991, 2004, and 2005. Bobby has also been named The Sporting News Manager of the Year eight times in 1985, 1991, 1993, 1999, and 2002 through 2005. Bobby Cox gives special credit for his career to Allen Cropsey, his coach at Selma High School. "Al was a truly amazing guy, a great coach and mentor, and was very special in my development," says Bobby. He also notes many teammates and opponents he knew from his days playing under the San Joaquin Valley sun such as Jim Maloney, Dick Ellsworth, and Dick Selma. "Jim Maloney was an awesome pitcher for the Cincinnati Reds, but I remember him as a good hitting shortstop, who had a rocket arm to first base. You could tell he was going to be a great one," added Bobby. Another outstanding player from Fresno High was Pat Corrales, who also had a successful major league career as a player, manager, and coach with Bobby and the Atlanta Braves. "We talk about it quite a bit here in our old age," Bobby laughed, "We miss it down there in Fresno. I'm sure it's changed a lot since we grew up, but those were really great days. Pat talks about Ollie Bidwell and Pete Bieden all the time, and I'm always talking about my old coach, Alan Cropsey, my baseball coach, and Gordon Johnson, my Selma High football coach, so it's many days there we spent in sports and just sports, period. Looking back, I remember lots of terrific players from our area, but I also remember that we blessed to have so many good coaches as well." Bobby and his wife, Pam, have eight children and live in Marietta, Georgia.