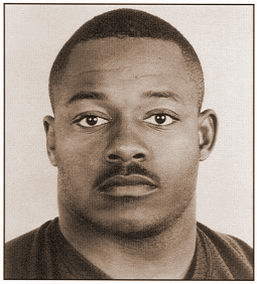 Fresno State linebacker Ron Cox's toughness and athleticism took him all the way to the NFL following standout careers at Washington Union High School and Fresno State University. He was awesome, the strongest athlete I ever coached," said former Bulldog coach Jim Sweeney. His attacks on the quarterback were legendary, leading to three Fresno State records: seven sacks in one game, twenty-eight in a season in 1989 and a career total of fifty. Sweeney and others talked about Cox's infamous take-down of a fellow Bulldog during a live play in a pre-game warm-up. "We were in a bowl game and he knocked out our starting fullback on one of those plays," Sweeney said. "The guy missed the game. He hit like a sledgehammer." The team's headfootball trainer at the time, Paul Schecter, said he was "fierce on the field and a gentleman off the field. Ron would do anything for you."Cox, 6'1" and 240 pounds, was named the Big West Conference's Most Valuable Player, Team MVP, and Second Team All-American in 1989. He helped the Bulldogs to a 27- 8 record in his three seasons, along with two California Bowl wins. Five of those losses came in his freshman season. In the 1989 Cal Bowl win over Ball State of the Mid-American Conference, 27-6, Cox intercepted a fourth-quarter pass and returned it fifty-eight yards for a touchdown.

He declared for the NFL after his Junior year and was a second-round pick (the 33d player drafted) by the Chicago Bears. He was a devastating tackler and steady outside linebacker for six seasons. Cox then signed with Green Bay as a free agent. He stepped into the middle linebacker role and won a Super Bowl championship ring.