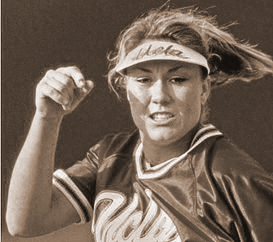 What began as a wish to play a team sport with her friends and was nurtured by hours of practice with her dad, Jerry, culminated in national championships, All-America honors, and MVP award in Japan Women’s Professional Softball League. She rose to stardom as a two-way threat, as an overpowering pitcher who could beat you with one swing of the bat for the Fresno Force and Bullard High School teams. Later, Dale-Boldt would lead UCLA to the 1999 Women’s College World Series title, capping one of the greatest pitching seasons in collegiate history. In the title game, a 3-2 victory over Washington, Courtney was the winning pitcher and hit a two-run home run. On that mound that season, she had a 33-1 record, with an 0.98 ERA and 218 strikeouts. She earned All-America and All-CWS honors and was named the Pac-10 Pitcher of the Year.

Teams with Courtney in the lineup dominated their competition. During her four years at Bullard, the Knights went 122-11 with a Valley championship in 1993. Her record: 73-6 in the circle, 347 batting average, four-time All-American, three-time All-Central Section, four-time league MVP and 1995 California Player of the Year. The 5-foot-10 Courtney also won ASA national titles with the force (under-16) and Gordon’s Panthers (under 18) and a world championship with the U.S. Junior National team.

A torn labrum and rotator cuff sidelined her in 2000, but she returned from what could’ve been career-ending surgery and won the Sharon Backus Award as the most inspirational UCLA player in 2001. Courtney’s name is all over the UCLA career leaders list. She finished 56-5 in the circle, with 370 strikeouts. At the plate, she had 110 RBI, 27 doubles and 17 home runs to go with a .290 average. In Japan, she was league MVP for the championship-winning Leo Palace 21 team.