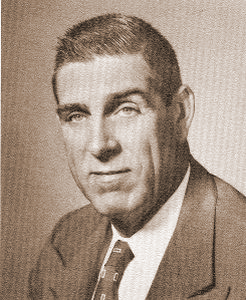 Gordon Dunn had two nicknames in various stages of his life. He was "Slinger Dunn" at Stanford University and "No Fun Dunn" while mayor of Fresno as he waged a relentless war on city vices. Dunn was born in 1912 in Portland, Oregon, but the family moved to Fresno early enough for the big youngster to begin his weight-throwing career for Fresno High School where he also played center on the Warrior football team. Dunn's finest moment as an athlete came during the 1936 Olympic Games in Berlin, Germany where he competed before Adolph Hitler. It was the same year that he graduated from Stanford. U.S. teammate Ken Carpenter captured the gold medal in the discus at 165' 7 3/8" while Dunn grabbed the silver medal at 161' 11 7/16". Dunn's effort was just shy of the NCAA record of 162'7" that he set while winning that event for Stanford in 1934. After Fresno High, Dunn attended the "feeder school" of Menlo Junior College before moving on to Stanford. While at Fresno High, Dunn won the first of fifteen gold watches in thirteen years of competition at the Fresno West Coast Relays. Moving to Stanford in 1934, he was chosen by the AAU to join a group of U.S. collegiate athletes to tour Japan, China, and the Philippines. Dunn returned with twenty-four trophies of various types from participation in eight meets.

Included in those awards was a sword presented in Japan that had been passed down through several generations and a large silver bowl which came from the International Olympic Committee in Japan. After Stanford, Dunn competed under the famous Winged-O emblem for the San Francisco Olympic Club on a team that included world record holders like Dutch Warmerdam, Fresno State's Elroy Robinson, and Olympians in nearly all running and field events. Dunn set an American record of 171'5 3/4" in 1936 during the annual Compton Invitational meet. The former record was 169'8 7/8". Dunn was a lieutenant commander in the Navy during World War II. After his discharge, he returned to Fresno where he deplored the wide-open prostitution and other crimes that flourished in the city. He was elected mayor at the age of thirty-six and was regarded as one of the country's toughest mayors on crime. Dunn died in San Francisco on July 26, 1964 at fifty-two.