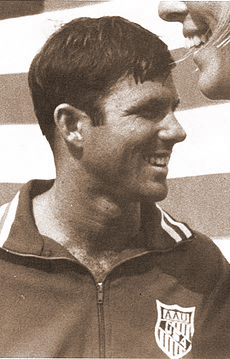 In the Fresno climate, a good place to be in the summertime,is at one of the nearby lakes, rivers, or swimming pools. Rick Earley found that the latter was one of his favorite places to be. In his early teens, he discovered diving competitions, and by the time he graduated from McLane High School in 1962, he was a two-time Valley Champion and had many offers to take his winning ways to college level competitions and beyond. Choosing Indiana University, it didn't take Rick long to become a well-known Hoosier, IU's top diver, and a national champion. In 1968 after his junior year in Bloomington, Rick Earley heard the call to war in Viet Nam and volunteered for the draft. He received advanced training as a medic at Fort Sam Houston in San Antonio, Texas. "Luckily, I did not get stationed in Viet Nam, as most of my medic class did, as I was stationed at Fort Wainwright in Fairbanks, Alaska," said Rick. "I did represent the U.S. Army in the 1968 Olympic Trials in Long Beach and the All-Military Games in Pescara, Italy." He was also honored to represent the U.S. State Department, touring and giving swimming and diving clinics in allied countries in such places as Morocco, Lebanon, Greece, and Turkey.

Upon returning to Indiana in 1970 to finish up his degree, Rick went right to work training and competing in diving competitions for a shot at the 1972 Olympics. In 1971, he qualified to represent the United States in the Pan American Games in Cali, Columbia. He took home the gold in the ten-meter platform and then qualified for the 1972 Olympic Games in Munich, Germany where he placed 6" in the ten-meter diving event. "It was a great experience even though we all had to deal with the terrible tragedy when the Arab terrorists came into the Olympic Village and killed several Israeli athletes," remembers Rick. Rick achieved great success in his seventeen years as a competitive diver and gymnastics and he lettered in both sports at IU.

After the Olympics, Rick came back to Fresno and started his teaching and coaching career in the Valley. After seven years of working in Fresno,Clovis, Madera, and Cupertino, Rick was offered a full-time coaching position at the University of Southern California. In 1984, he helped run the 1984 Olympic diving events at the brand new USC Olympic pool. He coached many diving champions in his fifteen years at USC, including his son, Brian, who won the 1993 NCAA Championship as well as the U.S. National Championship. Over the years, Rick has stayed busy with coaching and has taken many teams to competitions in the United States as well as Mexico City, Sweden, Madrid, and Rome. He coached the Mission Viejo club program until 2000 when they had sixty divers and won several national championships. Rick and his wife, Michele, moved to Big Bear where they are close to their family. He and Michele love to travel and spend time in the water.