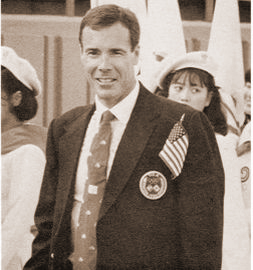 Skip Kenney never swam a competitive lap in his life, but parlayed the wisdom of Gene Stephens, Darryl Rogers, and Don Gambril with thirteen months as a Marine-the last four as a sniper in Vietnam-into the most successful collegiate team swimming program in the country. He coached his Stanford University team to their 27th consecutive Pac 10 swimming title, was head coach of the U.S. Olympic team in Atlanta, and assistant coach for both 1984 and 1988. His Stanford team won seven NCAA championships and he has coached 100 different All Americans and several Olympians, including Pablo Morales, a three-time gold medalist and world record holder. Kenney has no time table for retiring. “Retire? Maybe [in] five or six years; I'm having too much fun to retire," Kenney joked "I just [in 2008] had the top recruiting class in the country. I am fortunate to get the cream of the crop at Stanford and that makes it exciting." Kenney stresses team playing and equates that to his military experience. "Surviving the war and being a successful competitive swimmer have more in common than you might think," Kenney said. "Whether in racing or combat, for you to be at your best your mind [has to take] over and the body follows. Athletics and the military both need team unity, good leadership, and proper deployment of resources. Captains are important in both so are the nutritionists, stretch coaches and stroke technicians." Team chemistry is so important that Kenney relies on his veterans to access recruits and to help their teammates.

Kenney is a graduate of Fresno High, where he played Class B football and basketball and was a diver. The only swimming that he did was to cool off in the summer or to make it to the ladder after a dive. He went to Fresno City College, where his sister competed under swimming coach Gene Stephens. Kenney said he always thought he was going to be a coach, but swimming was not on the radar. He got to know Stephens and relied on his experience once he did start coaching Swimmers. At Stephens' funeral in May 2003, Kenney made the following statement: "Without his influence, I wouldn't have been coaching swimming at all. The main reason I'm coaching swimming today because of Gene Stephens.

Another person Kenney has great affection for is former Fresno State player and coach, Darryl Rogers. Kenney related one of his favorite stories when Rogers was helping Stephens with the divers. "There [was] no diving coach or team at Fresno City, so I practiced at Fresno State with Coach Hairabedian. I was in Darryl's car and we were driving to Bakersfield for a dual meet. Darryl looks over at me-he doesn't know me from Adam-and says, "Diver, if you can get two seconds,I think we'll win the meet.' I told him I thought [that] I could, but actually. I got two firsts. We won eight out of thirteen events and still lost. We're driving home and Darryl says to me, ‘Diver, what kind of a screwed up sport is this? When we score more touchdowns, we win. We win more..events and we lose. Then flash ahead [to] when Darryl was coaching the Detroit Lions and the East-West Shrine game was at Stanford.

The pro coaches were scouting players, so I waited until after practice and I was about thirty yards from him. Darryl started walking my way. He finally recognizes me and says, 'Hey, diver’ -he still doesn't know my name. I love the guy." Kenney was in the Marines in 1966 and 1967. Upon his discharge, he worked toward a physical education degree at Long Beach State, teaching for the Red Cross swimming program on the side. The mother of one of his students talked Kenney into coaching the community swim team at Redondo Beach. "I didn't have a clue what I was doing," Kenney recalled. I thought maybe you'd keep your team in shape with jumping jacks and push-ups and then show up at meets."This was when he went to legendary Long Beach swim coach Don Gambril and admitted his lack of knowledge; Gambril agreed to teach him. Gambril was tired of the constant barrage of questions, but was taken by Kenney's interest, enthusiasm, and his tenacity in trying to learn. Despite the fact that Kenney had no competitive swimming experience, Gambril hired him as an assistant for $100 a month. It was then that Kenney learned the importance of a stopwatch. Gambril wanted to know the time of every swimmer.

At Stanford, Kenney has a board that lists all team members and asks his swimmers to write their lifetime best sets on it. When Gambril moved to Harvard in 1971, Kenney went along, but after one year of the freezing weather, he launched out on his own. He coached the Houston Dad's Club for four years where he first tutored his current assistant and top recruiter, Ted Knapp, and spent three years with the Cincinnati Marlins where he coached five Olympians. Stanford Athletic Director Andy Geiger made Kenney one of his first hires in 1979.

In 1982, backstroker Dave Bottom, who had two brothers who had been Olympians while at USC, topped Kenney's second recruiting classes and launched the beginning of a dynasty. "When Tim came, that opened the doors for a whole lot of others to join him," Kenney said. "He had a high profile name and he was very good himself. By his senior year, we won the NCAA."