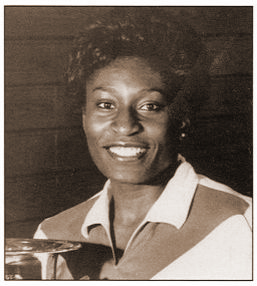 Fresno State All-American volleyball player Ruth Lawanson was a member of the 1992 United States Olympic bronze medal-winning team in Barcelona. She was also an outstanding professional player and coach. Fresno State Coach Leilani Overstreet recruited Lawanson from Clovis West High School, where her skills were raw, but her talent evident. Lawanson would become the most outstanding athlete that Overstreet coached in her twenty years at Fresno State. "She was so strong and could jump so well, I knew I wanted her," Overstreet said. "She was only 5'8", but she could jump out of the gym. She was such a rock-solid player, just a delight to coach. So dedicated to working hard. Ruth could have excelled in almost any sport. She was outstanding in track and basketball, in addition to volleyball in high school. I think, physically, I had a few teams that might have been better, but that 1984 group had the heart and Ruth was the leader."Lawanson, born in Nigeria, came to the United States with her family in 1965 when she was two years old.

Lawanson's earliest connection with organized sports was in the 4th grade, when she tried track. At Clovis West, she was a sprinter and a competitor in the long jump and shot put, making it to the state meet in her sophomore through senior years. But Lawanson's skills at volleyball not only vaulted her to elite levels in university athletics, but took her around the world to compete against the best from other nations.

At Fresno State, she was named Female Athlete of the Year, first-team All-American and Nor-Cal Player of the Year, while setting school records for kills and service aces in her senior season of 1984. The team finished fifth at the National Collegiate Athletic Association tournament that year. Lawanson was the first Fresno State female to have her jersey retired. Lawanson played professionally for the Dallas Belles and the Minnesota Monarchs, as well as for teams in Italy and France. She also competed for the U.S. National Teamincluding stints on the World Cup team. The Olympics were a highlight of Lawanson's sports career. "It was an unbelievable experience, especially when we walked into the stadium in that opening ceremony," she said. "It's something you dream about as a young person and what made it so special was my mother and father were there to watch."