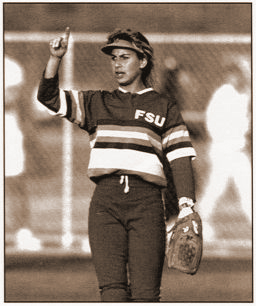 In 1986, Martha Noffsinger, a Southern California softball sensation from Edison High School in Huntington Beach, was sought after by many colleges around the country. The talented shortstop chose Fresno State because she wanted to play for Margie Wright and liked the Fresno area. As it turned out, Bulldog fans had many reasons to like her as well. A significant number of schools wanted her in their programs because Martha was a player who had great, all-around athletic ability. She was solid in the field as well as at the plate. She competed with the Bulldogs from 1987 through 1990 and led the team to three second place finishes in the NCAA at the Division I level.

In the field, Martha was in total charge of anything hit in her vicinity, making great plays that had the ever-increasing Fresno State crowds buzzing about her rocket arm. "She was the best," remembers first baseman Gena Strang. "She just threw bullets over to first. Sometimes you didn't know where it was going to be or if she would be able to complete the play, but the ball definitely got there on time and the fans loved it." Another treat for the Fresno State coaches was knowing that Martha could play any position on the field if needed. It was hard to guess what Martha was going to do up at the plate as she was an excellent bunter from the left where her speed running to first base made her hard to catch. She could also smash line drives with power which had many a bunt-charging infielder wonder if she might soon be wearing one of those line shots that Martha was very capable of hitting. Following her exceptional career at Fresno State, Martha represented the United States in international play and was a high draft pick in the Women's Professional Fastpitch League.

Noffsinger-O'Kelley's versatility helped her secure a spot on the gold medal-winning teams of the 1994 World Championships and the 1995 Pan American Games. She earned an alternate spot on the triumphant 1996 United States squad at the Atlanta Olympic Games where softball debuted as a full-medal sport. Martha later became a teacher and a softball coach in Las Vegas, Nevada, where she resides with her husband, Dean, and their children, Noah and Christian.