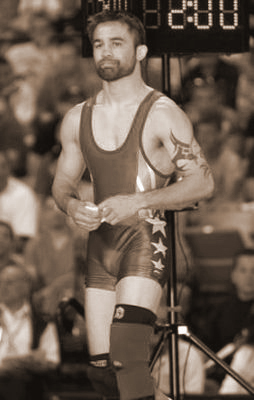 Stephen Abas was the smallest athlete in Fresno State history to find success on both the collegiate and international stages. Wrestling at 125 pounds as a collegian and 121 to 125 pounds in freestyle Olympic and World competition, the three-time state champion and high school standout compiled eye-popping records at every level. Winning a silver medal in the 2004 Olympic Games in Athens, Greece after suffering an injury in the first match was the ultimate moment, but three NCAA championships, three World Cups, and a Pan American title were close seconds. No one can question that Abas was the greatest Bulldog wrestler ever. While he had his choice of schools, he came to Fresno State because he wanted to follow his older brother, Gerry, who was a four-time All-American and an assistant coach at the school.

His high school record was 190-10 with most of the losses coming in his freshman season. Fresno State coach Dennis DeLiddo knew he had something special when Abas enrolled. "I knew he had a great work ethic, tremendous skills, and was highly competitive," DeLiddo said. "Of the mat, he was just a typical California kid.

One incredible thing about his Fresno State career: he never had an injury bad enough to miss a single match." On the night of his induction into the Fresno Athletic Hall of Fame, Abas was asked to name a couple of memorable moments in his amazing career. "I liked that picture [part of the multimedia slide show] where I had yellow hair with blood on my face after winning a World title," Abas said. "I had my family there to support me." What did DeLiddo think about the yellow hair? Abas grinned, "He told me to get rid of it and also my carrings."

Abas also praised his mother for all the miles she drove to take him to little tournaments in the state and even out of state during his formative years. Abas only lost one match during his final three seasons with the Bulldogs. His career totals of 144-4 included forty major decisions, thirty-three technical falls, and thirty-two pins. His one loss was to Eric Guererro of Oklahoma State, a three-time national champion, on a 4-3 decision.

Abas was included with fourteen other collegiate wrestlers on the 2004 NCAA's 75h Anniversary Wrestling team. In 2000, Abas took a year off from Fresno State to attempt to win a spot on the U.S. Olympic team, but lost in the finale of the Trials. He corrected that mishap in 2004. In Athens, he showed competitive spirit by fighting off a knee injury in his first match and battling his way to the finals where he lost to a Russian that he had beaten earlier. His opponent was a two-time Olympic champion, but the silver medal was a nice consolation prize. Four years later, Abas lost to Henry Cejudo in a best-of-three face-off at the U.S.

Terials and retired from competition. Abas remained active in the sport, coaching Poway High School in San Diego to a state title. He is also recognized for his wrestling camps and hopes eventually to have a wrestling school for young men.