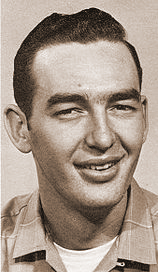 Gary Alcorn laughed when he reminisced about parking behind the old Fresno State gym an hour and a half before basketball practice and shooting a limit of pheasant or quail on the outskirts of the campus. This is a snapshot of Alcorn's life: basketball and in the outdoors. Alcorn was one of the Fresno State's finest basketball centers and still hold the Bulldog career rebound record. Bad knees on his 6'10", 240-pound body limited his professional career to two seasons; one each with Detroit and Los Angeles; however, he played when there were only eight teams in the NBA, which means at that time he was one of the top eighty professional players in the country. One of his proudest accomplishments for the Bulldogs during the school's two-season stay in the California Basketball Association was breaking Bill Russell's single season CBA rebound record. Alcorn was born and raised in Calwa on a small farm.

"Everyone around there cut peaches, picked grapes, and other crops. It was hard work," Alcorn said during an interview at his home in 2004. "My uncle had a fort-acre ranch in Selma and our whole family helped him harvest his crops." Alcorn was running up and down mountains, chasing deer and bears and hiking into fishing lakes long before he bounced a basketball. He never stopped that part of his life and his dad, an avid outdoorsman, was a good teacher. Hiking as well as the discipline and patience of hunting and fishing served him well when he entered Roosevelt High School. His legs were strong on a tall frame; his stamina and breathing were good. Alcorn said he was fortunate to have Stu Inman and John Toomasian as his coaches at Roosevelt. Both had been centers in college, Inman at San Jose State and Toomasian at Fresno State. Toomasian recalls the first time that he met Alcorn. "Buck [Alcorn] was a tall, slender, gawky kid I had to look up to. I determined ahead of time if he gave me a dead fish grip, he wasn't what I wanted. But his handshake was firm. He was a boy in a man's body. So each Saturday morning, I would open the gym and work with him and Tommy Urriate. I had played in the very strong AAU League after college which had teams with a lot of college All-Americans. It was very physical.

Jim Lustacoff of the Phillip Oilers broke my nose twice. I would bump Buck around pretty good. Alcorn had good work ethics, was always on time for practice, and stayed all the way. There were a couple of Saturdays he asked to be excused, so he could go hunting with his dad." Alcorn led the Rough Riders to the North Yosemite League title his senior year, once scoring a league record forty-three points against Fresno High. His next stop was Fresno City College, where he helped Joe Kelly's Rams win a state championship in 1955 and a third place finish in 1956. He was All-State both years.

"I had three great coaches in a row," Alcorn said. "Both Inman and Toomasian though I had a good chance of getting a college scholarship. Kelly told me he was sure I would get that and said I even had a chance of being a pro. My parents and two sisters didn't have the money to send me to college, so that was real encouraging. Joe's words were a big incentive to work as hard as I could, to dream high. Another thing was Fresno jumped to a league where we were playing some of the best teams and players in the country: Santa Clara, USF, St. Mary's, San Jose, Loyola and Pepperdine."

Even though his professional career was short, he played with and against some of the greatest players of all time. The best in his opinion was Elgin Baylor, who was Just short of 6'6", but could score or board with anyone. Others included Oscar Robertson, Bob Pettit, Bill Russell, Bob Cousy, Bill Sharman, Rex Kerr, Tommy Hawkins, Walter Dukes, Jerry West, and Bob Leonard.

When he entered the business world, he became the manager of the fishing department at Hanoian's Market. Later, he found some financial backers and opened Alcorn's in the Ashlan Park Shopping Center. Alcorn brought some of the biggest names in bass, trout, and ocean fishing to his annual spring weekend sale. Hanoian's was inadequate to hold the crowds of outdoorsmen who attended those sales. If you wanted a certain item, you were advised to get there before the store opened. Alcorn's was a much more spacious area and the crowds increased. Alcorn was widely recognized as a fountain of information for the fishing and hunting fraternity. He also helped found Kokanee Power, an organization that brought popular game fish to several Central California's lakes and reservoirs. Alcorn personally put in many hours helping local Department of Fish and Game biologists with stocking these Fish.