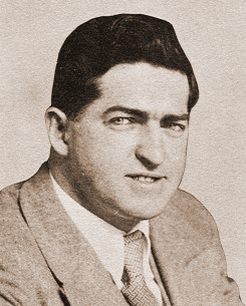 Albert C. White is probably one of the least-recognized great athletes with Fresno connections. The bull-shouldered White was the first person (man or woman) to win an Olympic Games double in diving. During the 1924 Summer Olympics in Paris, White took gold medals in the three-meter high springboard and ten-meter tower platform events. He graduated from Stanford University that year where he was the captain of the swimming and diving team. In all four years at Palo Alto, White was the best collegiate All-American diver in the nation. White was voted into the International Swimming Hall of Fame in 1965. Despite his remarkable double in the Olympics, White was best known in this country for his expertise off the one-meter low board where he never lost in collegiate or Amateur Athlete Union competition during his entire career. He won ten AAU National championships in a five-year span.

White was a twenty-nine year old World War I veteran when he competed in France. In 1919, before enrolling at Stanford, he toured inter-allied Europe with the U.S. basketball team along with pentathlon world record holder Fred Thompson and Dr. James Naismith, who is credited with inventing the game of hoops. Further evidence of his versatile athletic talents was that he also captained the Stanford gymnastic team as a sophomore and won the Pacific Coast Conference All-Around Gymnastic Championship in 1921. During the years that White lived in Fresno while working at the city engineer's office, he found time to coach youngsters and is credited with creating the surge of interest in water sports in local area high schools. White stayed in excellent shape and was still giving diving exhibitions in 1940. One year later, he returned to the Army in World War II as a lieutenant colonel. He later became the city engineer for the community of Richmond and was AAU diving commissioner for the Pacific Association. His coaching triumphs included teaching youngsters at the famed Athens Athletic Club and leading several AAU teams on tours in foreign countries.