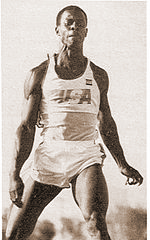 Fresno-born Randy Williams has the distinction of being the only local athlete to make three United States Olympic track and field teams. He still holds the world junior long jump record of 27'4" accomplished in his first Olympic trials in 1972 when he was eighteen years old. He turned nineteen the week of the Munich Olympics and is the youngest ever to win gold in that event. He followed that four years later with a silver in Montreal. His third chance for a medal in 1980 was wiped out when U.S. President Jimmy Carter decided to boycott the Russian Games. Not bad for a 5'9", 140-pounder who never touched any kind of performance-enhancing drugs during his illustrious career.

Randy Williams' road to the gold began in the seventh grade at Ivey School in Fresno. Williams walked out of the back gate at Ivey to go home and watched Eugene McDowell jump. "I went home and told my mom and she said I could try it. Joe Lee was my first coach. I weighed about 105 pounds and wasn't very fast, so 16 jump didn't quality for the junior West Coast Relays. Neither did my triple jump. I went home and cried. I told Coach Lee I would come back the next year and win both which I did. I jumped 19'4" in the long jump and 40'8" in the triple. By the eighth grade, I jumped 22' and kept going, improving three feet each year. In his senior year at Edison High School, Williams won the state CIF long jump at a national record 26'3", but it was ruled as wind-aided. In the same meet at UCLA, he set a national triple jump mark of 52'3 1/2" without wind. "The wind was not over the limit in the long jump, but the officials just didn't think I could jump that far," Williams said. "Tommy Brown of Long Beach Poly had made 25'7". That motivated me because I was in second place for the first time that year and it scared me." One year later as a USC freshman, he was #1 in the world.

What does he most remember from his first Olympic Games? "It was a great thrill to walk into the stadium with the United States team. When they announced Team USA, there was a tremendous roar. But my greatest memory was standing on the podium with my gold medal while the National Anthem was being played and the flag was raised. It was not just in that stadium. It was being televised all over the world. Even now, l get chills to think that it was all because of me and what I had accomplished. It's not every day you can do something for your country. A lot of athletes are thrilled to make their high school or college team, but I made the ultimate team and won." In 1976, Arne Robinson, who finished third to Williams in Munich, won gold in Montreal by one centimeter.

Williams laments that it was a lot of hard work for nothing in 1980. He decided to do something different and joined the Marines. He tried to make the team for the 1984 Los Angeles Games, getting to the first round of qualifying, but was too stiff and sore the next day and failed to secure a spot. At the age of twenty-eight, he hung up his spikes for good. Today, he enjoys training young jumpers and runners. "It is justifying to see kids you tutor do well," Williams said. "All track and field events are complex when you do them right. You don't just run down the runway and jump. There is a technique and the first thing to work on are basic running skills. If you can't run properly, it is very difficult to be successful in the long jump." Williams could run the 100 yards in 9.3 seconds and the 100 meters in 10.2. "My little legs have taken me all over the world," Williams says proudly. "Japan, Russia, Sweden, Budapest, Germany, Norway, you name it. Most of the great long jumpers such as Ralph Boston and Bob Beamon were tall, pretty big guys. I never worried about being tested for drugs. I was an exceptionally gifted athlete and I worked hard. That's all there was." He coaches and raises cattle. Williams considers selling calves a better investment than the stock market. Williams spent fifteen years with the Madera Fire Department and retired after a decade and a half with the Clovis Fire Department.