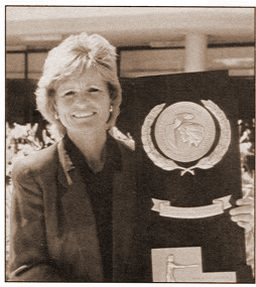 Margie Wright was the first Fresno State coach to bring home a National Collegiate Athletic Association title, leading the women's softball team to the championship in 1998. With dozens of conference, regional, and NCAA achievements to her name, Wright holds a place in ten Halls of Fame and broke the record for most NCAA softball victories.

A long list of All-Americans played for Wright, as well as athletes winning top honors for achievements in the classroom. More than a dozen Olympians came out of Wright's program as her teams averaged more than 50 wins a year and were among just a handful of squads nationwide to make ten or more trips to the Women's College World Series. She was the first NCAA Division I coach to reach 1,000 victories in softball.

Wright's Division I National Championship title was a highlight in the history of the university's sports programs: a l-0 victory against the University of Arizona behind the home run of Nina Lindenberg and the incredible pitching of Amanda Scott. It was a truly great day for Fresno State, fans, and the San Joaquin Valley. A few days later, the team was ranked#1 in the country.

Wright, whose career at Fresno State began in 1986, also was an accomplished public speaker, motivator and published author. Wright learned to play softball in her hometown of Warrensburg, Illinois. The all-around athlete went on to college at Illinois State University, where she earned four letters in both softball and basketball and three more in field hockey. After graduating in 1974, she taught physical education and coached at Metamora High School in Illinois. Her assignments included softball, volleyball, track, basketball and even bowling, and if that didn't keep her busy enough, she also played softball in a women's professional leagues.

When Fresno State hired Wright, she had already coached at the university level for six years at her alma mater, Illinois State, where she led the Redbirds to six winning seasons and a 163-92-1 record. In 1995, right after another fifty-win season at FSU, Wright was named an assistant coach for the USA softball team for the 1996 Olympic Games in Atlanta. In her first official role as an Olympic coach, she led the USA National Team to a gold medal at the 1995 Superball Classic and, in 1994, coached the USA National Team to its third consecutive World Championship title in Newfoundland, Canada. All of these feats led to the USA Olympic softball team capturing gold, beating China 3-1 in the final. The squad included five Bulldogs.

Wright's successes paved the way for the construction of Bulldog Diamond, the on-campus beauty of a stadium that was a testimony to Wright's ability to bring the community and the university together. Christened in 1982, Bulldog Diamond was a state-of-the-art facility that attracted some of the biggest softball crowds in the nation. It has hosted more than twenty NCAA regional tournaments.