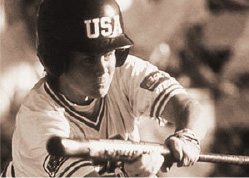 Athletic and busy as a child, Stokes decided to channel her energy into softball. It was the right decision as she would reach the pinnacles of accomplishment in the sport: an Olympic gold medal and All-America recognition by the NCAA and Amateur Softball Association.

Stokes’ sterling defensive skills as a catcher gave rise to a standout career in international competition that also included playing for the historic 1996 Olympic gold-medal winning team and gold-medal performances with Team USA in the 1995 and 1999 Pan American Games.

After a standout career at Del Campo High School in Fair Oaks, California, where she made the switch from second base to catcher, she signed with Fresno State because she wanted to play for Coach Margie Wright.

The Bulldogs advanced to the NCAA Women’s College World Series every season of Stokes’ career (1987-90) after winning conference championships, three times finishing as the Women’s CWS runners-up to UCLA.

Both her teammates and Bulldogs fans knew that Stokes was Ms. Reliable behind the plate, but the woman who wore No. 35 on her jersey also developed her hitting skills. Over her final two seasons with the Bulldogs, she hit .264, scored 56 runs, drove in 50 and slugged 31 extra-base hits, including seven triples.

During that time, she was a calming and sure-handed presence for such standout pitchers as Lori Romeiro, Terry Carpenter, Marcie Green, Melanie Parrent and Carie Dever. During the Stokes era, Bulldogs pitchers tossed 12 no-hitters.

Wright said of Stokes, "Her defensive prowess didn’t end with being the receiver for several All American pitchers. She was known by all opponents to be a real "Bulldog" at the plate and very few who tried were able to score when it came down to her blocking the plate to get them out. That skill helped make her one of the greatest catchers in Fresno State history."

Stokes says that Coach Wright has had "a great influence" on her life and she attributes her softball success to "never taking the easy way out and always working harder than your competitor!"