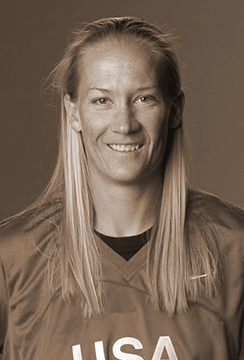 Veteran Fresno State coach Margie Wright summed up her description of Bulldog outfielder Laura Berg in a few words: "The best woman outfielder ever." Wright's statement carries weight since she is the most successful coach in NCAA Womens' Fast Pitch division. Internationally, she has seen the best from all over the world, but far more than Wright's words are the records that Berg set at every level of collegiate and international play, some of which will be difficult or impossible to eclipse.

Wright had watched Berg's steady progress at Santa Fe High School in California where she earned eleven varsity letters, four each in softball and basketball and three in volleyball. She was a four-time league MVP in softball. "I was just amazed at how she could run, throw, and hit," recalled Wright. "I also recruited her twin sister, Randi." Berg is the most lauded athlete -male or female-in Fresno State history, the most decorated Olympic softball player from any country, and a four-time All-American Bulldog who virtually rewrote the school record book.

Berg played in four Olympic Games the only softball player ever to do so-and has three gold medals and one silver to show for it. Just being selected to try out for the U.S. team is an honor, but making the team all four times makes her unique. "I was a twenty-one year old rookie for my first Olympics and sixteen years later, they called me Grandma," Berg said. "It was a bitter pill when we failed to win all four. Nothing can top the feeling of standing on the podium and seeing your flag raised above the rest.”When the spotlight was on Atlanta in 1996, Berg singled in the third inning of a scoreless championship game against China and teammate Dot Richardson hit a home run for a key 5-1 VIctory. During the Atlanta Games, Berg averaged .273 which was fourth best on the team. One of her fondest memories was in the 1996 Games when she ran in from center field after Lisa Fernandez ended the gold medal game with a strikeout.

Flashbulbs were popping all over the field and the pile of celebrating players was already tipping over. In Sydney, Australia in the eighth inning of the title game with Japan, Berg hit a long fly ball that Shiori Koseki gloved hut dropped, enabling pinch-runner Jennifer McFalls to score the Winning run. In Athens in 2004, she was the starter in eight of nine games and hit .368 while playing errorless ball in center field. Berg also played on four World Championship teams, three Pan American gold medal winners, and two World Cup championship teams. In the 2007 Worlds, she was given the honor or carrying the flag for her country at the closing ceremonies. The team visited the White House after the 2008 Olympic victory in Beijing, China and Berg presented President George W. Bush with a #1 jersey and slapped a chalk-laden handprint on the back of his dark coat. This was not unusual for a woman who loved to play pranks on her teammates and even on Coach Wright. Berg's statistics at Fresno State were unreal. She was the only player in Fresno State history to have three consecutive 100-hit seasons.

Berg ended her collegiate career second on the NCAA career list with 396 hits. Leading off for four years at Fresno State, her career average was .414 and she was fifth in games played, first in triples, second in total bases, first in hits, first in runs, second in stolen bases, fourth in slugging percentage, and first in hit by pitches. Berg's single season best batting average was 458 which is third best. "Laura was a real nice person, the ultimate team player, and a leader," Hall of Fame softball player Jeanne Contel said. "She was always upbeat and a very exciting player to watch. She was the best center fielder I ever saw." Laura's goal was to be a member of the Los Angeles Police Department and to serve her community.