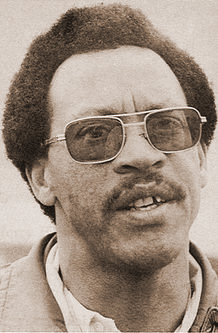 The boycott that never happened deprived Charles Craig of an opportunity to represent the United States in the 1968 Olympic Games and a legitimate chance for a medal. The Fresno-born former Central High athlete and NCAA triple jump champion at Fresno State in 1965 was disappointed at the time, but said it could have been a blessing in disguise since it caused him to get on with his coaching career. The retired track and field coach at Cal State Bakersfield (1973-2004) is recognized as one of the finest coaches and representatives of his sport in the country. He was voted into the U.S. Track & Field and Cross Country Coaches Association Halls of Fame. Craig missed the 1964 Olympic team by inches; he had a 53’ jump, but was three spike marks over the board, so it didn't count. In 1965, Craig and teammates, Sam Workman, Marvin Bryant, Darel Newman, Sid Nickolas, and Bill Allen, won the Division NCAA championship in Fresno. Craig in the school's 4 X 100 relay team, Allen in the pole vault, and Nickolas in the long jump all qualified for the NCAA Division I meet. Craig won the triple jump at 51'9". Newman opted out of the relay in an attempt to beat Hayes, so Craig said it was 9.5 Craig on the relay team instead of 9.2 Newman. The Fresno team still placed third in 40.3.

Craig was fully convinced he could make the team for the 1968 Mexico Games. It appeared that he was a lock when he won the 1967 Pan American Games gold medal with a personal best of 54'3 1/4". He had a 53'9" early in 1968. "There was talk that the United States black athletes were going to boycott the Olympics," Craig said. "Our Olympic Committee decided to have a pre-Olympic Trial in the Los Angeles Coliseum. They said if you finished in the top three, you were pretty well-assured of making the team. There was a scramble to get the Coliseum ready. They draped a makeshift all-weather rug over the asphalt triple jump runway. It was the hardest surface I had ever jumped from. I hit an area where there was very little covering and injured my heel. The injury was bad enough that I was unable to compete in the real trials."Craig has been accorded an impressive list of honors. Among other achievements, Craig was the head manager of the 2004 U.S. Olympic team in Athens, Greece; assistant manager for the 1992 U.S. Olympic men's team in Barcelona, Spain; assistant coach for men's jumps for the 1996 Atlanta, Georgia Olympics; assistant manager of the 1991 World Games U.S. Olympic team in Tokyo; and Triple Jump and National Coordinators for the Triple Jump in the USA Track and Field Association from 1989-2000. He is also in the Fresno State Track Hall of Fame, Class of 1992 and the Kern County Bob Elias Hall of Fame.