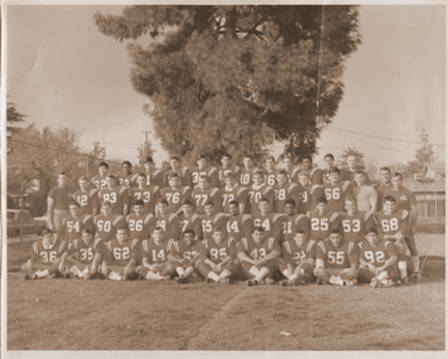 East Los Angeles had most of the press clippings and a star running back in Clarence Davis, who had broken O.J. Simpson's state community college rushing records.

But it was the Rams, with a bevy of future NCAA Division I recruits, who claimed the California Community College championship with a 16-7 victory before 3,500 of their cheering fans on Dec. 14 at Ratcliffe Stadium.

Davis, the future National Football League star, put East Los Angeles ahead in the first quarter with a 1-yard scoring run. But it was all Rams the rest of the way as they reached 10 victories in a season for the first time in school history.

A defense led by linebacker Roger Huntington limited Davis 91 yards on 28 carries. Huntington was ably supported by Dwayne Crump, a defensive back who later played four seasons in the NFL; defensive back Tom Lucero, who holds the Fresno City College career record for interceptions (20); and Carl Moler, who would later play both football and rugby at Long Beach State.

Running back Vic Lamanuzzi powered the Rams offense with 170 yards on 32 carries behind the blocking of All-American Ken Mayo up front. Mayo, too went to the next level at the University of Hawaii. And, in fact, Lamanuzzi did all of the scoring for the Rams: two touchdowns, a PAT conversion and a 28-yard field goal.

Quarterback Mike Rasmussen, a future Michigan State standout, kept the chains moving by connecting with receivers Steve Natsues and Chuck Davidian, the school's No. 1 and No. 4 all-time receiving leaders at the time of the team's induction into the FAHOF.

When the final whistle blew, the Rams had their state title and a 10-victory season. Among their season-ending nine straight victories were two over arch-rival College of the Sequoias and state playoff conquests of Marin and El Camino.