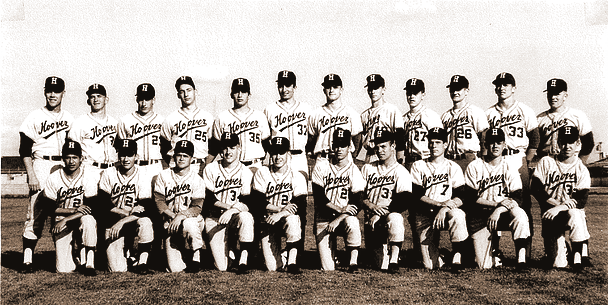 Coached by Jack Hannah, who was inducted into the FAHOF in 1998, the Patriots won the North Yosemite League and Central Section championships and were recognized as the best prep team in California and the nation by media outlets.

Hoover compiled a 27-3 record against stiff competition and boasted a lineup brimming with .300-plus hitters and a pitching staff anchored by Bruce McKinney. They won the school's first Central Section title by besting Bakersfield 10-3 in the title game.

The double-play combination of shortstop Ron Dunn and second baseman Fred Frazier helped out the pitching staff in the field and at the plate.

Both earned the attention of major-league scouts and went on to long careers in professional baseball. Dunn reached the majors with the Chicago Cubs in 1974 after originally being drafted in the fifth round of the 1968 draft by the Baltimore Orioles. Frazier, a fourth-round selection of the New York Yankees in 1969, played 12 seasons in the minors, including nine at Triple-A.

In a 1974 interview with The Fresno Bee's Ron Orozco, Dunn credited Hannah with helping him make "The Show." Said Dunn: "That was my dream. Jack Hannah had a lot to do with it. He was so helpful to all of us."

In addition to Dunn, Frazier and McKinney, catcher Dick Wukits and third baseman Kirk Wells made The Fresno Bee's All-Metro team. Hannah was honored as The Bee's Coach of the Year.