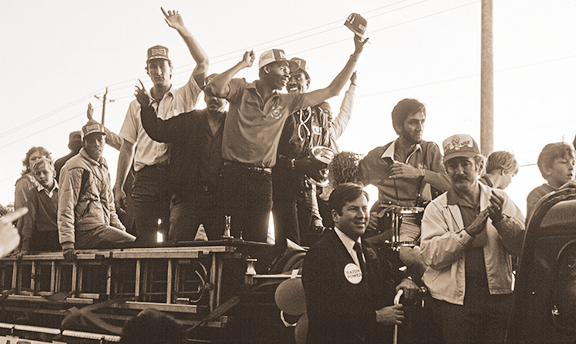 March 31, 1983 was a special day for Fresno, her basketball fans, and the San Joaquin Valley. The Fresno State basketball Bulldogs were coming home to celebrate their incredible victory over the DePaul University Blue Demons for the National Invitational Tournament championship at Madison Square Garden in New York City. There was a wonderful feeling in the air as Boyd Grant's Bulldogs, who had entered the famous tournament as underdogs, went all the way to the top by beating five teams in the 43rd annual NIT. Many people came out to the airport or waved in the streets as the happy players and coaches rode on fire engines and vehicles that were brought to the FSU campus field for the party. It was a very large, vocal, and happy contingent of fans and friends in perhaps the finest moment ever for the famous Red Wave. "It was great to win the NIT!" Coach Grant told the crowd, "This has unified the Valley, the state, and the university. We all care and we all share."

The Bulldog team had ended the regular season with a heartbreaking loss on a last second basket in overtime to UNLV in the PCAA Conference Tournament championship game. The Dogs had won seven straight to end the season with a 20-10 record. The Bulldogs definitely had a great challenge in the NIT with the likes of Arizona State, LSU, Michigan State, Minnesota, Notre Dame, TCU, Wake Forest, Oregon State, and DePaul among others in the forty-team field. In round one, the first game for the Dogs was at "Grant's Tomb" in Selland Arena in front of a packed house of Red Wavers. Desi Barmore led the Dogs to a 71-64 victory over the Don Haskins-coached UTEP Miners. Barmore scored twenty points including going 10-10 from the free throw line. The Red Wave gave the team a great send-off as the Bulldogs were going to be on the road to wherever destiny would take them. As it turned out, it was a long road.

In round two, the NIT Sweet Sixteen, the next game was in East Lansing, Michigan where the Bulldogs took on the Michigan State Spartans, a team that had three future NBA stars in their starting five, Kevin Willis, Scott Skiles, and Sam Vincent. The Dogs stunned the Spartan crowd with a 72-58 blowout. Again, Desi Barmore led the way with sixteen points and fourteen rebounds.

In round three, the NIT Elite Eight, the road game would be at one of the toughest places to win in the country, Gill Coliseum on the campus of Oregon State University in Corvallis. It's where basketball Hall of Famer and Oregon State coach Ralph Miller led the Beavers to eleven NCAA/NIT post-season tournaments. The high-spirited fans made it difficult on visitors, but this time, the Bulldogs would send them home quietly after the Beavers came up short to the Dogs, 76-67. The "Bookend Forwards" of Fresno State, Bernard Thompson and Ron Anderson, combined for forty-eight points as the Dogs did what very few have ever done, beat the Beavers twice in one season in Corvallis.

For the NIT Final Four, the Bulldogs were off to Madison Square Garden in New York City. The team had to face a very powerful Wake Forest squad that had lost to the eventual NCAA champions, North Carolina State in the Atlantic Coast Conference tournament in overtime, 71-70. The Dogs came away with a shocking 86-62 victory in which they shot an amazing sixty-seven percent from the field, led by Ron Anderson's twenty-four points. They out-rebounded the bigger Demon Deacons, 36-22, and all but six of their field goals came via assists. Tyrone Bradley had twelve assists in the game. With this huge victory, the country was certainly falling in love with this upstart team from Fresno State. Was it a fluke? No way, said North Carolina legendary coach Dean Smith. After he saw how the Bulldogs handled Wake Forest, Coach Smith said, "Fresno State should have been in the NCAA tournament. There is no doubt about that. Those Bulldogs are for real."

In the NIT championship final, the Dogs faced the most successful active coach in college basketball, Ray Meyer and the DePaul University Blue Demons. The game did not disappoint the national audience that saw the battle. A unique twist added to the game was that many of the players from both DePaul and Fresno State were from the Chicago area. Fresno State 's outstanding point guard, Tyrone Bradley, upped the ante by proclaiming the game was also going to be, "for the bragging rights of the Windy City." Bernard Thompson chipped in with twenty-two points and put the Dogs ahead to stay with a great three-point play off of a Bradley assist as Tyrone broke the Blue Demons full-court pressure. Ron Anderson had fourteen points, but the main factor was a disciplined team defense that held the mighty Blue Demons to sixty points.

Bermard Thompson and Tyrone Bradley were named to the All-Tournament team while Ron Anderson was honored as the MVP. After the game, Boyd Grant said, "We had the lead and we were able to get into our control game. Then we won it at the foul line". There are many thousands of grateful fans that came out to give heartfelt thanks to their heroes, the great team, the coaches, the pep and cheer squads and the Fresno State Tamily.