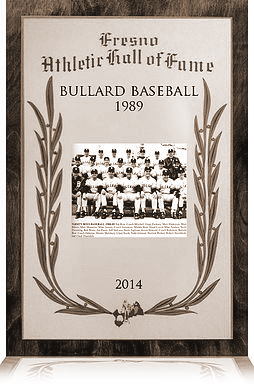 Coach Mike Noakes' Knights not only dominated the Central Section, but competition from coast to coast, finishing the season with an 28-2 record and rankings of No. 1 in California and No. 2 in the nation.

​Johnson hit .429 and slugged 12 home runs. He also compiled a 10-2 record with 88 strikeouts and a 1.64 ERA on the mound while often facing the opposing team's ace pitcher. He was named The Fresno Bee's Player of the Year for the second consecutive time.

​Waits followed an 11-0 junior campaign with a 10-0 record to close his career with nary a loss and earn all-section honors. As for Noakes, he repeated as The Bee's Coach of the Year.

Shortstop Robert Swanbeck was also an all-section choice by The Bee. He hit .402, had 24 RBI and stole 13 bases while anchoring the infield defensively.

​It was the second Yosemite Division crown in a row and third in the 1980s for Bullard. The Knights walloped second-seeded Hanford 15-2 in the title game, as third baseman Darrick Walker drove in five runs and Waits was the winning pitcher.