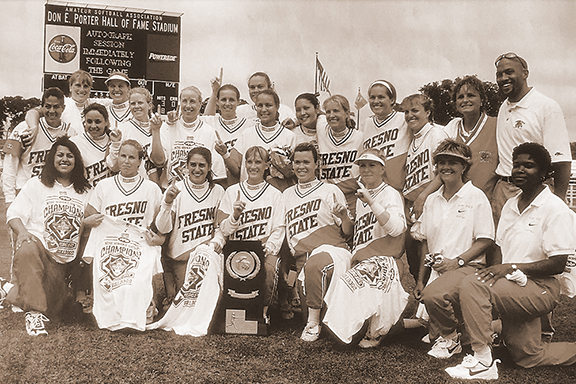 Fresno State University’s 1998 Women's Fast-Pitch Softball team set a record that will stand forever as the first Bulldog squad in any sport to win a Division I National Championship. Soundly defeating the Iniversity of Arizona Wildcats, the stellar squad won big at Don E. Porter Hall of Fame Stadium in Oklahoma City. Second baseman Nina Lindenberg hit the first pitch in the sixth inning from Arizona ace Nancy Evans over the left field wall, giving Amanda Scott what she needed for a 1-0 victory over the two-time defending champions.

MVP Scott blanketed the Wildcats on three hits with six strikeouts. The triumph snapped Arizona’s twenty-nine game-winning streak. In getting to the championship game, Fresno won all three of their NCAA Regional match-ups, seven played in Fresno. They beat Minnesota twice and UC Berkeley once.

In the Women’s College World Series, Fresno was seeded seventh with Arizona at first. The Bulldogs quickly finished off Nebraska 6-1 and Michigan 8-0. Washington beat Fresno 3-1, but the Bulldogs retaliated, sending the Huskies home with a 6-1 loss and setting up the final game with Arizona. Coach Margie Wright had led the team to seventeen straight regional appearances and five previous trips to the nationals. Fresno’s squad finished the season 52-11. They went 28-2, winning the Western Athletic Conference Championship for the sixth time with two shared titles in Wright’s first thirteen seasons. That championship year, the team had four All-Americans: Becky Witt, Laura Berg, Amanda scott, and Nina Lindenberg.