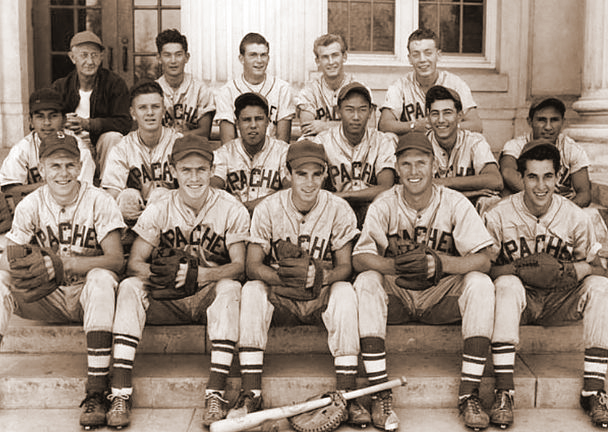 After claiming his first San Joaquin Valley high school championship in 1947 and making the playoffs the following two seasons, Sanger High coach Huntley Dayton knew that his team in the spring of 1950 had the makings of something special.

Like many small-town coaches in the post-World War II era, Dayton coached more than one sport. During his career at Sanger, he led the Apaches to ten league championships in basketball and seven league crowns in football, twelve league titles in baseball and two San Joaquin Valley baseball crowns. He accomplished all this without any assistant coaches.

Sanger dominated its competition in the Sequoia League, winning all six games and outscoring opponents by a total of 49-12. Then it moved on to the Valley playoffs, where it faced two larger schools, Roosevelt High of Fresno and Visalia High.

Even though the Apaches faced a Roosevelt team that had star catcher Bob Bennett - a future College Baseball Hall of Fame coach - was more than ready. The Apaches, as they had all season, hit the ball with authority in an 11-9 victory at John Euless Park.

Playing at home in the title game, the Apaches faced a Visalia High team coached by Hank Beiden, brother of another College Baseball Hall of Fame coach, Pete Beiden, a Sanger High School alumni. The first inning was a wild one, with Sanger knocking around Visalia starter Joe Hannah and taking a 7-5 lead.

Both teams settled down and with the score tied 8-8 the Apaches went to the plate in the bottom in the ninth backed by a crowd of 1,200 fans on their home field.

Bill Krider drew a walk, went to second on a wild pitch and scored the winning run on Swede Johnson’s single to right field. Charles Greer was the winning pitcher.