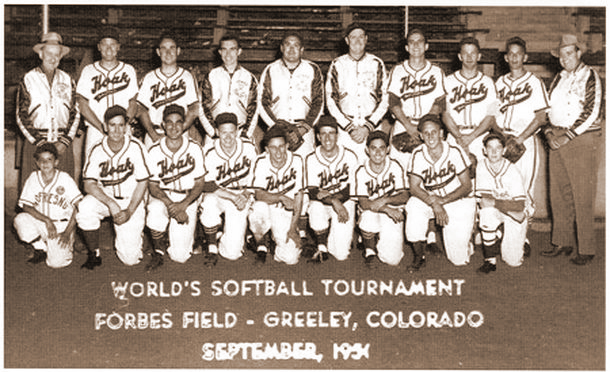 It was the heyday of softball and several of the best teams in the nation were based in California, three in the Central Valley alone.

The Hoak Packers were actually an offshoot of the Kingsburg Merchants, who had been organized by Fresnan Hal Britton, who became the All American catcher for the Hoakes and Hal Masini, who became the Packer's manager. Transition from a good town team to the best in the nation came in 1950 when the late James Hoak took over as club owner. That year, the Hoakes won their first of four Internation Softball Congress National titles. The others came in 1951, 1952 and 1954.

In 1950, the Packers beat the Hanford Kings 3-0 in the championship game, their fifth win in five tries in Greeley, Colorado. The following two years, they bested the dominating team in softball, the Long Beach Nighthawks. The Nighthawks won in 1953 in Selma, but in 1954, with the ISC tournaments again in Selma, the Packers took their final national title, this time against another Valley rival-Dinabua,. Leroy Zimmerman and Les Haney were the Hall of Fame pitchers for the Packers in all four championships. Bill Horstmann, who was missing part of a finger on his pitching hand, giving the ball a peculiar twist, was a regular pitcher in 1953 when the Packers reached the simifinals before losing to a team from Lorenzo, Texas. One thing is certain: when Hoak owned the team, it was a first class organization. Probably as remarkable, was the fact that the entire team was from San Joaquin Valley towns.

During the regular season, when games were scheduled at the same locale, the three-time world champion Fresno Rockets would share one bus with the Packers. Selma put in nearly 6,000 bleacher seats, with close to 10,000 in attendance for the Fresno Shriner-sponsored championship game. The team disbanded after 1954. Pitchers Zimmerman and Haney signed with a Nighthawk team that captured six staight championships to close out the decade. Catcher Hal Britton, a five-time All-American, was voted into the ISC Hall of Fame in 2008.