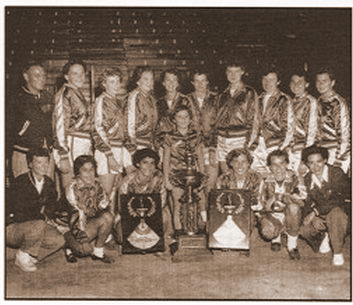 The Fresno Rockets played arguably at the highest level of women’s softball ever in this area and helped change the notion that only men were allowed to excel in sports. Th squad attracted sold-out crowds at Holmes Playground near downtown Fresno, numerous sponsors, and three national titles.

Women’s softball has been popular since its inception in 1887, but the heyday for amateur leagues dawned in the 1940s with the development of travel teams across the country. For twenty years, starting in 1946, the Fresno Rockets and the rest of the Western States Softball League teams were among the best in the nation. At least one team-and often more-usually ended up at the Amateur Softball Association Championships.

The Rockets were born when Dutch Chandler, team manager of the 1943 and 1944 Men’s National Champion Fresno Hammer Field Raiders, and star pitcher, Kermit Lynch decided to put together a women’s team. They were called the San Joaquin Maids during that first year, named for their sponsor, Sun-Maid Raisins. Vera Miller pitched a perfect game in the national tournament in Cleveland, Ohio, which is believed to be the first no-hit, no-run game in that event’s history. A Fresno Bee sports editor called the team “the Fresno Rockets” during the squad’s second season and the name stuck.

In the 1950s, the Rockets collected four future Amateur Softball Association Hall of Famers: Jeanne Contel, Gloria May, Kay Rich, and Ginny Busick. With a strong supporting cast to fill out the team, the Rockets won the ASA National Championships in 1953, 1954, and 1957. While Chandler was the organizer, Bernie Amaral was the manager, the first woman to lead the a team at that level. The team won the first two titles without dynamic pitcher Ginny Busick, who had turned professional and had to sit out two years before returning to the amateur ranks. She made the most of the opportunity in 1957, going 5-0 in the nationals and allowing just one run and ten hits. Busick blanked the Phoenix Ramblers 1-0 at Buena Park in the Championship game. Joan Fuchs, Vera Miller and Carol Nelson were pitchers for the first two titles, beating the Orange Lionettes 2-0 in Toronto and repeating 2-0 over the Lionettes in Southern California.

Cowds jammed Holmes Playground to watch the Rockets at a time when pitchers dominated the game. It was an adventure whenever the Rockets traveled with players normally jamming into two or three station wagons with no air conditioning, driving cross-country for tournaments. They practiced and played five times a week, all while holding down full-time jobs. To a player, they said the team chemistry was great as players were united in their love for the game. Teams like the Fresno Rockets developed a fan base and skill level that advanced the sport into mainstream athletics and gave women a venue to perform at the highest level of their sport.