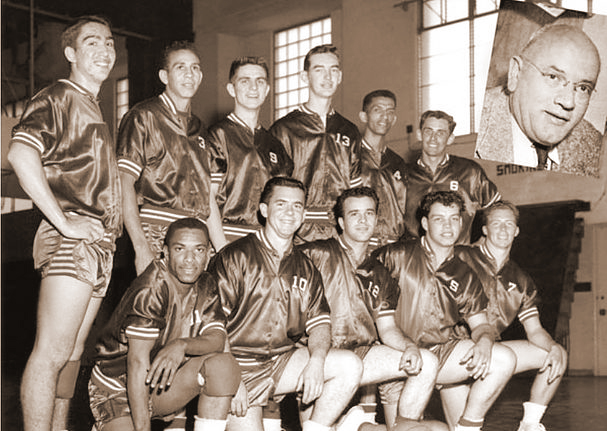 The Rams had it all: height on the front line, speed in the backcourt, good shooters everywhere and a demanding coach in Joe Kelly, who could match wits against everyone. Using these ingredients, the team put together a magical season, winning the state championship before a crowd of 2,000 at the Roosevelt High School gym.

After concluding the Central Conference season with a 12-0 record, the Rams advanced to the postseason where they met the top two-year colleges in California. The Rams fended off Los Angeles Valley, 86-73, in the opener; West Contra Costa, 86-82, in the semifinals; and Mt. San Antonio, 88-85, in the title game.

In the title game, the Rams had to overcome the loss of Alcorn, who fouled out four minutes into the second half, and Mt. SAC center John Henderson, who scored 31 points. Freshman Don Birkle picked up the slack with his rebounding and Bon Taul, a 17-year-old freshman, scored 13 points. It was Benson, a U.S. Navy veteran, who clinched the game with a late basket.

Alcorn led the way in the semifinals with 29 points, Benson had 24 points and Johnson 23 points. In the opening-round game, Benson led with 26 points and forward/center Ray "Chief" Williams scored 17. The Rams’ accuracy at the free-throw line was important, as they made 33 of 46 against the tall L.A. Valley club.

Officiating was a subject of controversy throughout the tournament. But Kelly offered complaining coaches no solace, saying that they were poor sports.